I started playing Dungeons and Dragons with my son at Thanksgiving of 2014. I chose the 1981 edition of the rules for their simplicity, the self-contained nature of the basic ruleset, and the fun vibe of the thing. Those books had been in a box at Grandma's house for 25+ years but they were an immediate hit. The Boy was clearly enjoying the game and he was soon drawing maps and characters and castles, and asking detailed questions about what was going on.

Our play continued to the point where he was making decisions taking into account the ambitions of the medieval despots in the game world I'd invented. One or two of his friends joined us. We were doing something together and he was developing skills. I'd found something we could do together that would encourage him to read, solve problems, and be imaginative. Woohoo! 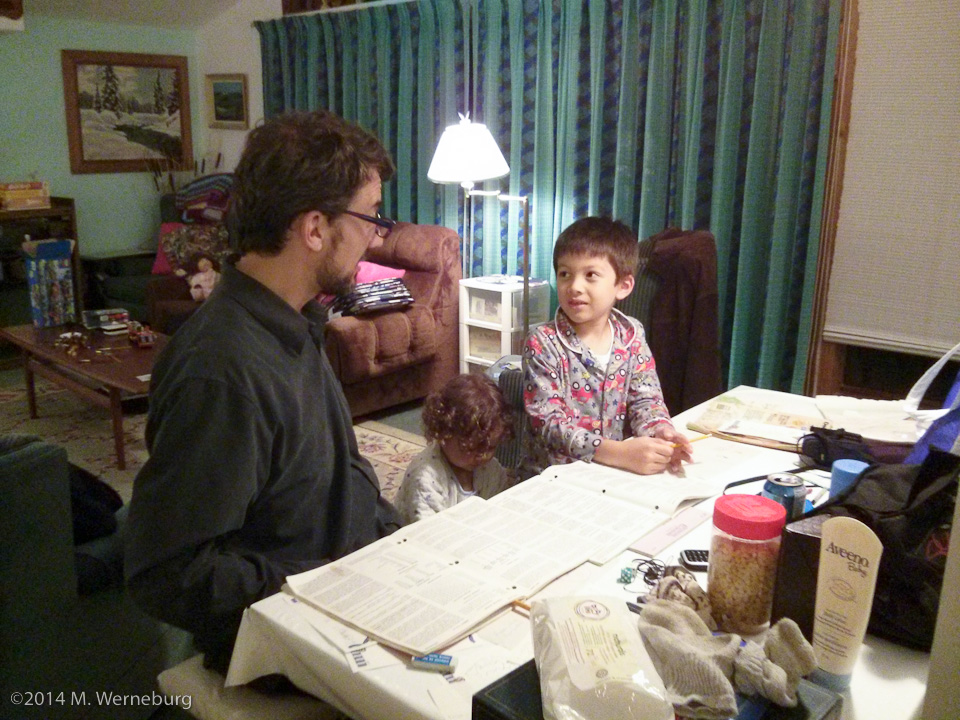 The Boy in his first D&D game

But those early 80's versions of the game were never very well organized despite their simplicity—it was a chore trying to find things in the thick of the game's adventure. Also, there were a number of obvious bugs in the game. Search parties, for instance, are less effective than a single pursuer.

So I dug up my "Advanced" rule books. They had the advantage of adding new spells and magical devices and player-classes. But working with those books reminded me how word- and dice- and rules-heavy they were. And if anything even less well organized.

So I went looking for an update. What I found was that there is now quite a broad range of versions of fantasy role-playing games available.

Among the many, many re-writes of D&D that now exist I found Labyrinth Lord, a cleaned up redraft of the 1981 basic/expert ruleset with some minor refinements. Then I also found Dungeon World, a variant that relentlessly focuses on story and dispenses with an amazing amount of the mechanics (not to mention the word-count). It is very spare in all of its descriptions, and usually concludes with "if in doubt, chose an outcome that supports the story." Both versions are imaginative and solve some of the bugs of the original game.

Realizing for the first time that I could create my own game, I merged the two, fixing the things I considered bugs and adapting something of the style of Dungeon World. It's been play-testing well, and it certainly is a fun exercise in itself. I called it Deeds & Destiny.

Since game rules apparently can't be "copyrighted" per se, you are supposedly able to share creations based on other game rules if you extract the copyright materials (e.g. images). In that vein, here are our three books: Lore; Magic; and Monsters.

2014.12.12
I'm adopting the Dungeons and Dragons game "Labyrinth Lord" to suit my tastes, and it's been great fun. While I leave most of the rules alone, I've drastically changed two races, modified a t

2014.12.14
The "infravision" of Dungeons and Dragons is hopelessly broken. I've decided to get rid of it.

magic in basic dungeons and dragons

2014.12.02
One of the many "bugs" in the original game of Dungeons and Dragons was the magic system. This is my attempt to fix it.

new monsters for dungeons and dragons

2014.12.22
I'm inventing monsters for the dungeons and dragons game I'm playing with my son.

2017.01.22
The rules around wilderness pursuit in Basic/Expert Dungeons and Dragons never made much sense. Here's a revision.

2016.01.08
As an accessory to game play, this piece did its thing perfectly: it lent itself to story-framing and tactical planning perfectly.

2016.01.27
I've decided to replace the alignment listings in the game. Monsters need alignment descriptors that will help you figure out how the monsters are played.

I feel fortunate that I enjoyed the blandishments of modernity. I had hip replacement and root canal. I was able to travel on airplanes. I was able to take cheap food for granted. I went to the movies. I enjoyed rock 'n' roll. And now I'm ready to move on.