magic in basic dungeons and dragons

One of the many "bugs" in the original game of Dungeons and Dragons was the magic system. Frankly it was stilted at best and crippling at worst. Here are some of my beefs:

One: magical brain-wipe. Many authors on the 'net have pointed this out, but it's always bothered me that wizards lose all of their spell-casting ability due to spells burning out from their brain upon casting. It's always felt like it was tacked on to the rules simply to limit the power of the wizard. This brain wiping doesn't happen with the saint or druid characters, whose spells are derived from a god or from nature. Is it really worth being a wizard when you can't really do anything but cast spells, and yet you have to learn your trade from scratch every night? Wouldn't this simply drive the wizard mad?

Two: too few spells per day. A starting wizard can cast one spell. After this he needs to rest for eight hours, then start studying again. This leads to what's known as the "fifteen minute work-day" because the wizard effectively becomes a torch-bearer or unarmed lookout after he's cast his one spell. Playing a wizard this way is BORING.

Three: too many spells per day. A 20th level wizard or witch can cast some forty-four spells in a day. This would require eleven hours of study every day. Taking away eight hours a day for sleep and eleven for studying, and presumably eating once in a while, this leaves about four hours to cast all 44 spells. Or about ten spells an hour. Never mind that many of the spells take quite a long time to cast. Also, this level of spell-casting would cause total burn-out. Imagine casting spells with the power of wishes with Gatling-gun rapidity. You'd fry your mind.

Four: spell progression. A starting wizard can only cast the smallest of spells. While this is understandable, what exactly is the mechanism that limits a fifth level caster to a single third-level spell, while a seventh-level character can not only cast two third-level spells a day and a fourth-level spell? Are we once again placing artificial limits on the class just to keep them in check?

Five: spells always work. No other character class has the ability to always succeed when using their primary skill. Clerics—who lug around armor and swing weapons in addition to using divine magic—stand a great chance of being ineffectual in their combat. As do fighters, and they can't use any magic. Thieves have non-combat skills such as lock-picking, and these have great failure rates. What makes the wizard's spells always work? Is it the game rule that otherwise straight-jackets the character in compensation? Is this game about "balance" or fantasy?

My solution: I get that magic should be hard, but I think it also be useful. I want a system of magic use that lets a wizard do something with his unique skills for a full day, not just "the fifteen minute work day". I want the wizard's abilities to scale with experience, but not to be straight-jacketed by artificial limitations on spell level availability at lower level. In short, I want to start again. Here's the sample from my rule book.

Please note that some of the text below comes either from the RPGs "Labyrinth Lord" and "Dungeon World". Also, I drew on various discussions online such as this one at KORPG.com

The Force: Zealots do not derive their spells through experimentation and research, but instead receive knowledge and power through the force that flows from grace of The Goddess. It is only available to those who are born sensitive to the force. Divine magic is, like the Goddess herself, infallible.

Druidic: The erdei uncover and utilize magic emanating from the power of the natural order. While natural magic does not fail, it is not available to civilized races; only the wild, fey things may use it. Steel is an impediment to this type of magic.

Arcane: the arcane magic thought to have come to Sppang with the elves come from secretive research into the nature of reality. Arcane spells draw upon mystical and unstable energies. The instability and unknowable nature of the power source leads to occasional spell failure.

Memorized hand gestures combined with arcane spoken words bring about magical effects through spells. A caster of arcane magic may cast a total number of spell-levels equal to his WIL per day. For instance, a witch with a WIL of 14 may cast for instance two fifth-level spells, a third-level spell, and one first. This reflects the draining aspect of spell-casting. All spell casters need 8 hours of rest to restore spell ability. They don't forget their spells and need to relearn them every night, but they do need their spell-books—for trading spells.

While spells cast from a scroll do not fail, all other arcane and druidic spells have a chance of failing. To successfully cast a spell, the caster must roll 1d6 and 1d4 and subtract the latter from the former—the result must be equal to or greater than the spell’s level. 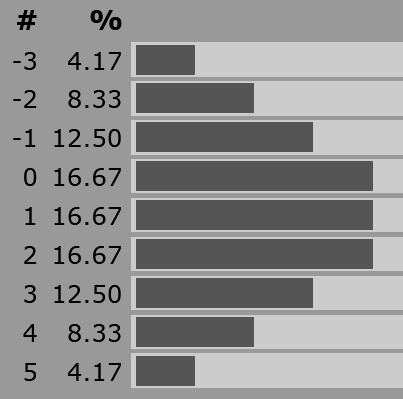 "To hit" with magic

A small number of spells may be cast as an offense. I have removed saving throws against magic from the game (e.g. why does casting "Light" in the eyes of an enemy to temporarily blind him allow a save, while casting "Magic missile" to attempt to kill not?). So I've added a "to hit" with magic. It works just like spell failure, above.

Adjustments: The use of a magic wand reduces the chance of failure, adding +1 to the roll.

Arcane magic spells cast from a scroll do not fail.

Magicians may use any armor but note that restrictive or iron/steel-based armor raises the chance of spell failure as follows.

The DM should choose what happens in case of spell failure. For instance, a failed Fireball might immolate the spell-caster’s clothes and possessions, or summon a fire salamander. A failed Wizard lock spell might permanently and irrevocably lock the target, or smash it. Whatever happens, it should fit the circumstances and the story that is unfolding.

Clerics and druids have access to all spells. Wizards and elves begin play with four spells – the player may choose two first level spells and one second level spell, but any other spells can only be added to a spell book through game play.

Wizards and elves gain additional spells by finding them in spell books or scrolls to copy to their spell book, or by conducting original research. Spells may not be purchased.

Whether conducting original research or rebuilding a lost spell book, a wizard or elf can build a spell book one spell at a time, at a cost of 1 week of game time and 1,000 gp for each spell level. For instance, if two first level spells and one 2nd level spell are researched, it will take 4 weeks and 4,000 gp. This activity requires complete concentration, and a character doing this work may not engage in any other activity for the duration.

Final word: I've obliterated all spells above level five, an alternative suggested in the Labyrinth Lord rule book. I allow NPC's (such as a lych) to use them, but not characters.

Listen, smile, agree, and then do whatever the fuck you were gonna do anyway.