I've concocted a new system for random monster encounters for my home-brew of the game Labyrinth Lord, which is a form of Dungeons and Dragons. These were my objectives: 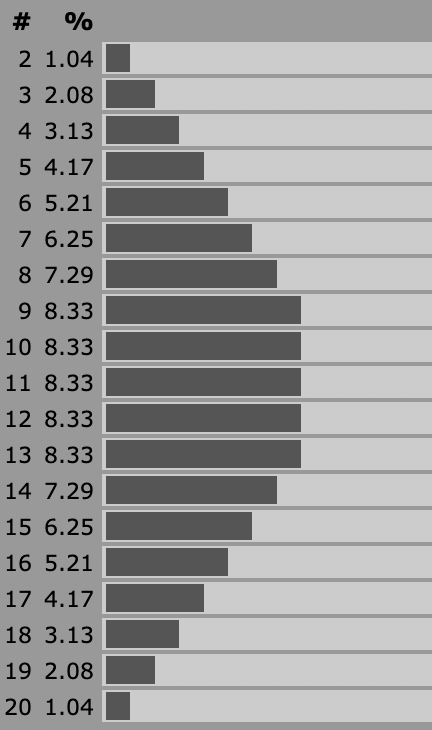 Distribution: I was playing around with the distribution results for different combinations of dice on anydice.com and found that a d8 plus a d12 resulted in an interesting distribution that yielded 19 outcomes - as in the image at left.

I said to myself, that would work very well for a random monster distribution! Why on Earth does the game use a single d20 and give everything equal opportunity? Then by chance I noticed in the back of my ancient Monster Manual II that in fact the original authors of Dungeons and Dragons had made the same discovery, and had spelled the whole thing out very nicely (though with a raft of typos, oddly).

So I'd re-invented the wheel a bit. No matter, it would help with the distribution issue.

New creatures and their ecology: The original game seems designed to ensure continuous combat a host of monsters of various designs that are all motivated by the same few things: hunger, hatred, or insanity. Where are the cunning creatures or those just trying to get by - ones with whom a variety of different possible responses to meeting a party of humanoid adventurers? Where are the details of how these species must live that they'd be encountered in some abandoned mine-shaft or cavern or "dungeon"?

My random monster tables are available for download as Excel and PDF files. You'll need Labyrinth Lord, or the old "B/X" games plus the MMII, and whatever online source you can find for the "grick". Use these tables one rolls the d8/d12 combination outlined at the top of this page.

Documentation is like sex: when it is good, it is very very good; and when it is bad, it is better than nothing.