This is my former watch. It's a "Momentum" by St. Moritz. 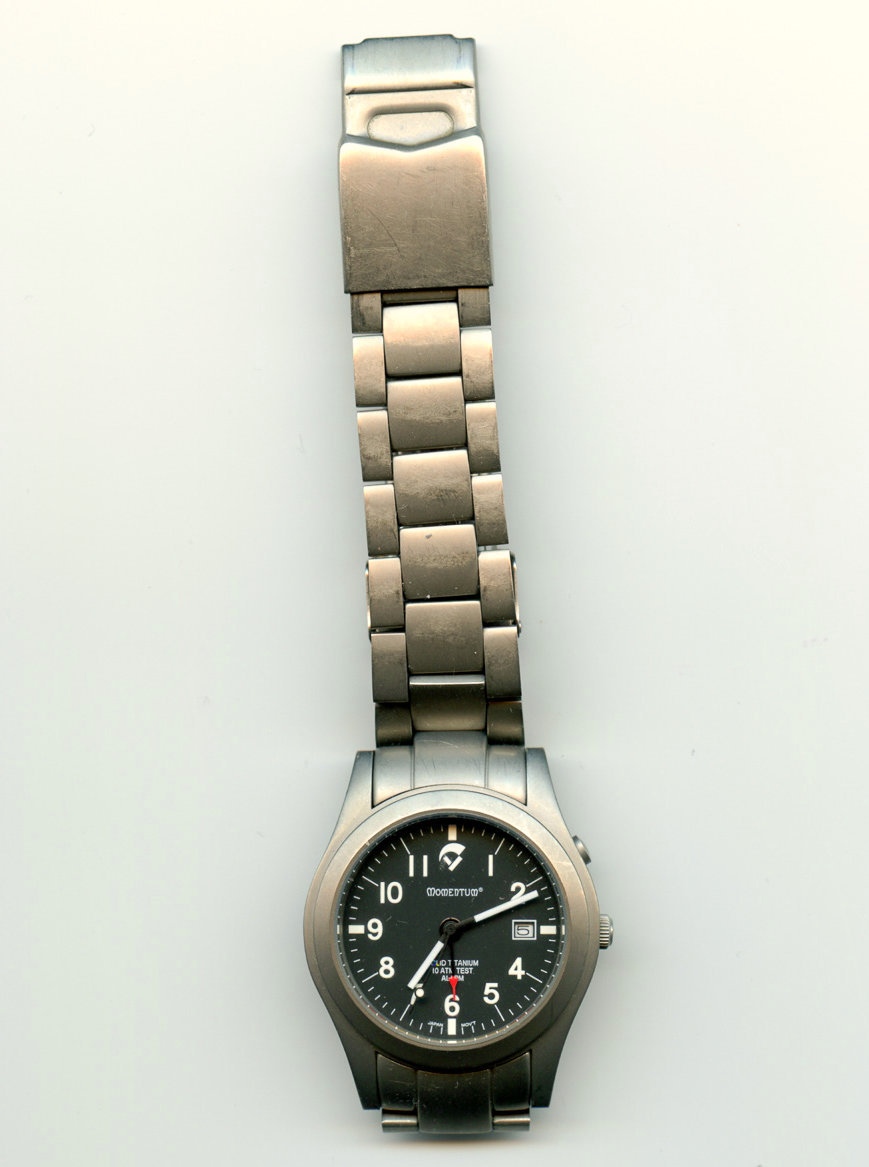 In 2005 I was looking for a watch after going without one for about six months. I thought that because I lived in a major industrial nation, I'd buy local. The only "made in Canada" timepieces I could find at the time were from St. Moritz. I was pleased to find an affordable model I liked in the Momentum. It was a $200 casual titanium design with a simple bezel and a numbered dial. With a quartz movement it had a low profile that would fit under my sleeve. As it was a set-and-forget quartz, I was expecting years of service as a daily wearer.

Buying a fashion brand watch was a deviation from the inexpensive quality watches I'd had from brands like Lorus, and would turn out to be a mistake. Whereas before I'd relied on years of service with machine-made pieces from distant Asian automated factories, this "made in Canada" fashion piece would be a dud. (I'll have a bit more to say about the "made in Canada" later.)

The problems began when I bought the watch with the nice-looking stitched leather strap rather than the bracelet option. During that first summer, that leather simply fell apart. I'd worn watches with leather straps for years and had never seen anything like it. Disappointed, I bought a second one from St. Moritz -- an expensive and slow process given that I was by then living in Tokyo. That second band also rotted away in the course of a year. My inquiries with the company went nowhere: they simply didn't respond. Instead of learning my lesson, I then ordered the metal bracelet from St. Moritz. While the more expensive bracelet finally managed to last two whole years, this longevity was more than the watch itself had in it.

Because during the hot Tokyo summer of 2010 the watch suddenly fogged up. I don't know if it was moisture or mold, and I didn't care -- it was supposed to be a water-resistant watch.

In November of that year I had a opportunity to take the thing into the Mountain Equipment Co-op in Toronto, to which I'd returned. Walking up to the sales counter I noted that they were still displaying the latest model of this same watch. I told the fellow, "Hi, I bought one of these watches."

In the ensuing conversation, it turned out that everybody's leather straps had disintegrated, and that St. Moritz no longer sold that type of strap. Instead, they were selling a faux-leather that's suppose to last longer. He held one up for me and instructed me to smell it. Chocolate?! Yes, they'd impregnated the fake leather with the smell of chocolate. I declined. The fellow at the watch counter told me to take the watch to the service counter for a trip back to the "manufacturer" (read "assembler").

At the service counter, I was told that many of the watches were turning up fogged. When I asked, "What about the dive rating," she said that she'd heard from the manufacturer that prolonged exposure to humidity was actually worse than outright immersion in water. Sounds nutty to me, but then not as nutty as chocolate-flavored watch straps. Some fogging is to be expected in a watch under certain circumstances -- it goes away again as the moisture reverts to vapor. But this was persistent and clearly indicated a problem.

By January, I got the watch back. The fogging was gone. But now the watch was moving slowly. "Needs a new battery," I told myself, and took it to a shop in the neighborhood. A couple of days after the battery switch, the thing once again started getting progressively slow. I'd been warned that this might happen by the jeweler who sold me the battery. Whatever he'd seen had troubled him, but he'd warned that that would mean the thing needed to be disassembled and properly repaired.

In only five years I watched it become useless despite no strenuous use. I never once immersed it in water. Now thrice-bitten, I was leery to spend more on a repair that could be required again in only a few years. I'm amazed that they didn't replace the inexpensive quartz movement before sending it back to me despite everything I'd spent on the watch.

There are several brands that offer much greater reliability. Fashion brands may dabble in rugged designs as this Momentum was meant to be, but the real thing lies elsewhere. In my experience the Japanese manufacturers are the reverse of brands like Guess and St Moritz and other short-lived watches I've had: they make no loud claims but instead deliver real reliability.

As evidence, I'll start with the Lorus quartz "date-just" homage that was a gift to me from my parents in 1989. It lasted fifteen years and cost $85.

I'll then move on to my Casio Duro, which lasted eight years and at $50 it cost a quarter of what the St Moritz did before my various replacements.

I've now had an Alba solar watch, which like the Lorus is made by Seiko. It's been two years and the only issue I've had is that the cheaply-applied paint on the bezel has chipped off. This watch cost the equivalent of $90.

When it comes to ruggedness, I doubt that anything can beat Casio. At $100, my son's Casio DW-6900B "Fox fire" has now run for three years and shows no sign of slowing down. It's a digital watch with an animated complication but hasn't even required a battery change. As far as durability, it's rated at 20 Bar water resistance and it's so far survived two bicycle spills and who knows what other forms of mistreatment.

My final comparison is with a $22 Casio W-218H, another digital model that I wear for abusive activities like fishing and hiking that could destroy a more expensive watch. I've had it for nearly two years and its cheap plastic band has outlasted two leather bands from St. Moritz.

More recently, I've become interested in some Chinese brands. I have one watch that costs about $15 and according to one Youtube review I've seen I can expect it to last a decade. I also have an automatic (mechanical) watch that's over two years old and comes with a sapphire crystal despite costing only about $80: again, sapphire crystal and automatic movement! I've had no sign of fogging despite having replaced the hands on the watch.

Update, 2019: I now wear a Seiko day to day and have had no problems with it for five years and see no sign that it won't last for many years to come. It's the automatic SARB033 I mention in the link below, and it cost less all in than my ill-fated St. Moritz.

Several readers over the years have countered my story with better news of their own. I'm glad to hear it, as I still want to "buy local" when I can. But I eventually learned that this company doesn't really make the watches in Canada. They're only assembled in the country -- which for all I know just means adding the chocolate-flavored straps. With inexpensive quality alternatives out there, I don't believe it makes sense to buy "fashion brands" that won't support their product.

Seiko's SARB line of watches exist to give "aspirational" Grand Seiko owners something with which to pretend it's all right.

I bought a beater Casio that turned out to be a fine watch – with a few warts.

my Casio weighs a ton

I was shocked to receive this fine watch from Casio's "metal twisted G-shock" line as a 50th birthday present.

Can a beater both be perfect and a disaster at once? Alba argues yes.

Racism isn't born, folks, it's taught. I have a two-year-old son. You know what he hates? Naps! End of list.