my CASIO weighs a ton

My dear brother bought me this watch for my fiftieth birthday. It was an unexpected generosity, a far more expensive wristwatch than I'd ever have bought for myself despite my long interest in watches. It's the size and shape of a good-sized dive watch but of course is nothing like the me-too crowd of endlessly-copied divers. It's a distinctive sports watch that stakes out its own territory that wouldn't be out of place in a William Gibson novel. I've been wearing it daily for three months now and I've learned some things I thought I'd share. 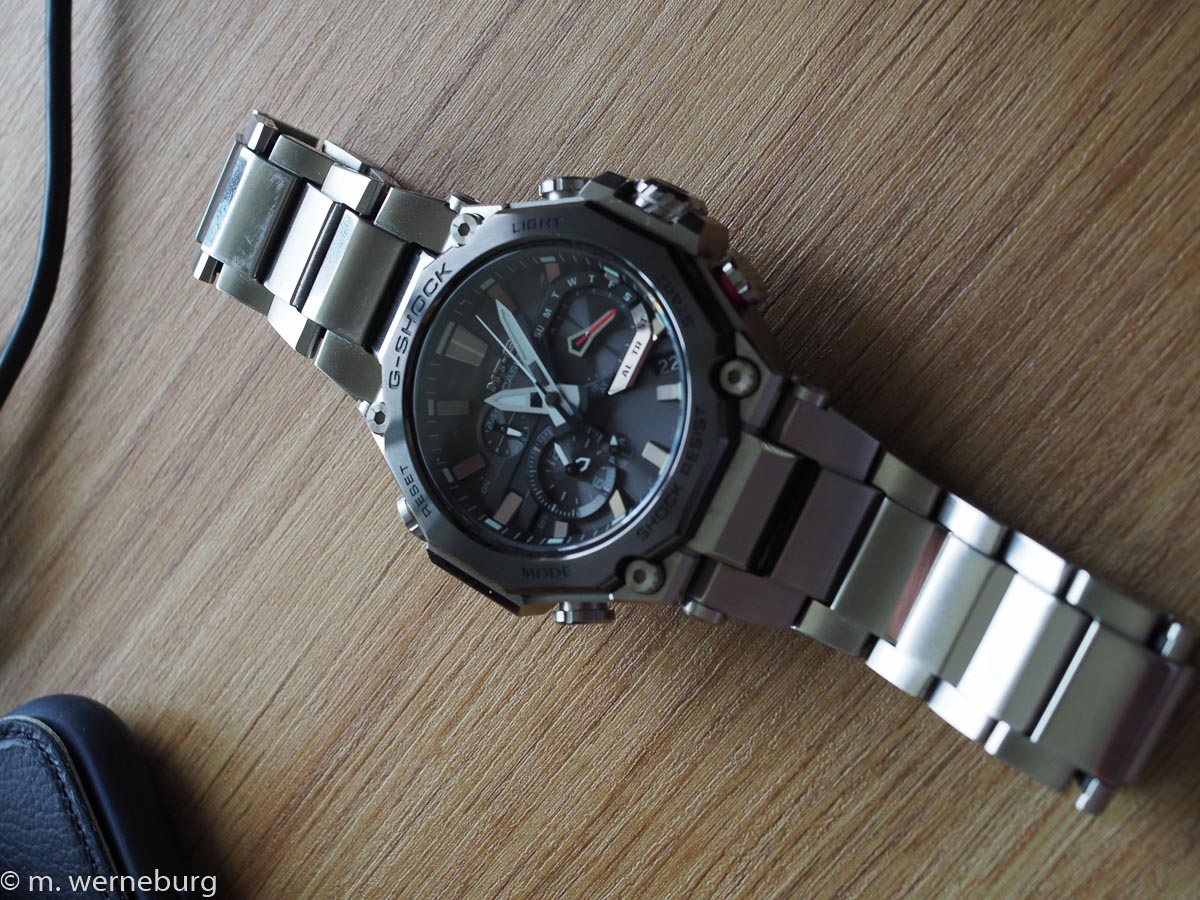 This is the latest in a line of "Metal-Twisted G-Shock" models going back to 2008, in which the roots of today's designs were clearly present. The basic idea was to have a metal shroud around a tough core design. The clear stamp of Casio's design sensibilities has been present since the first model - the MTG-1000. With time the series has become more refined and some variants have commanded prices into the thousands of dollars - well outside the usual range of Casio's products.

Watches are jewelry, even watches that can withstand being run over by a car. And with a big piece of jewelry wearability matters. The watch is large but despite the title of this review, not really heavy. It's just north of 150 grams according to Casio - about the same as a typical 40mm dive watch. But who needs yet another dive watch! I'm very pleased that Casio are taking their computer expertise - they do call themselves Casio Computer Co after all - and unlike the rest of the Japanese watch industry, innovating. I've found it very well balanced and that the carbon/resin body keeps it in place rather well despite my wearing it a bit loose. I have quite a pronounced wrist-bone, so I leave my watches loose enough that they can slide fore or back across that protruding lump of bone. I've noticed with this watch that it does so quite smoothly; there's no feeling of top-heaviness even when the piece is moving on the wrist. I rather like the bulk of the thing as a matter of fact, though my prior daily for seven years was a dramatically smaller Seiko SARB033, and I am currently assembling a 50's style 36mm Rolex Datejust knock-off.

Design also matters when it comes to timepieces. This watch presents an octagonal design, which has been all the rage these past few years. I love the look. The single-piece carbon core of the case is the most outstanding design element, capped with a very nice sapphire crystal and a deep dial.

I took some macro shots by hand-holding a lens in reverse at the front of my camera. It's an imprecise method but here goes. 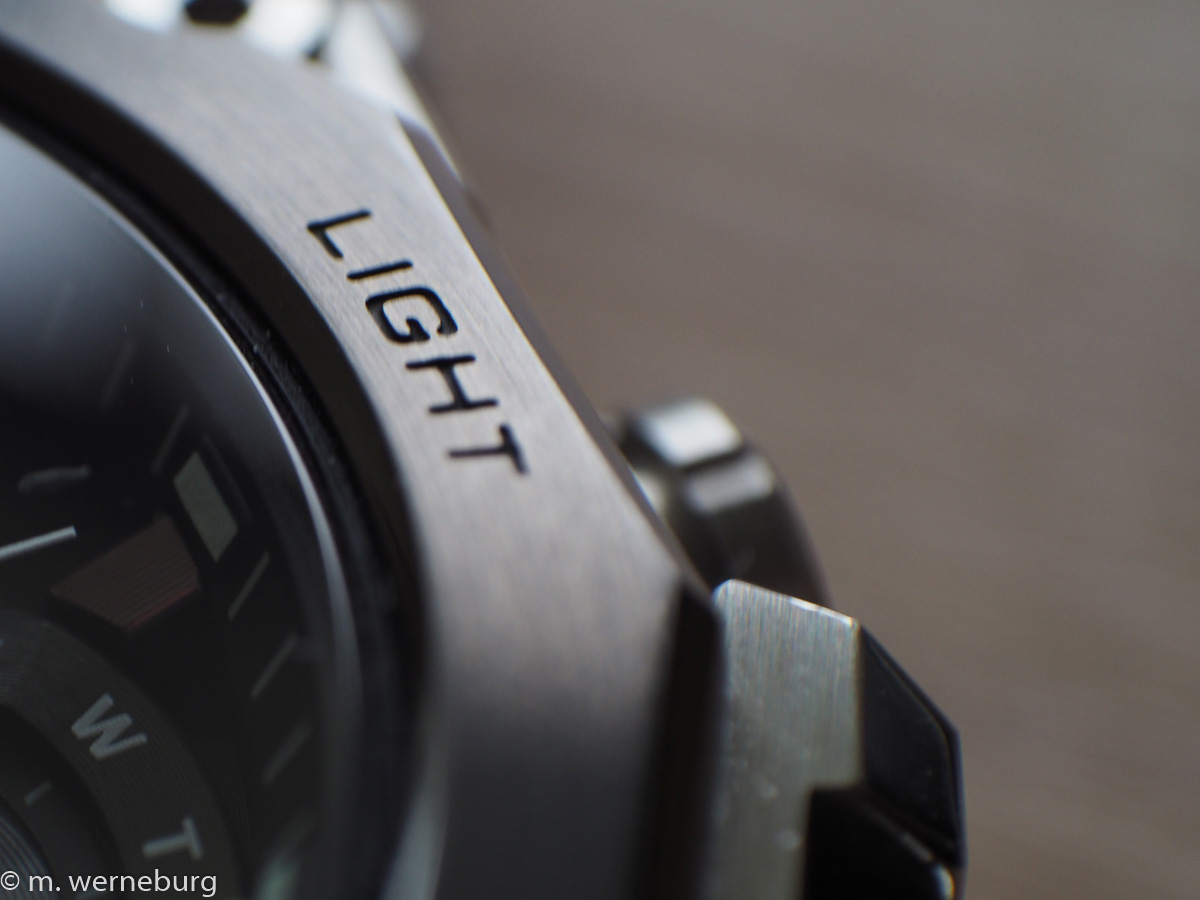 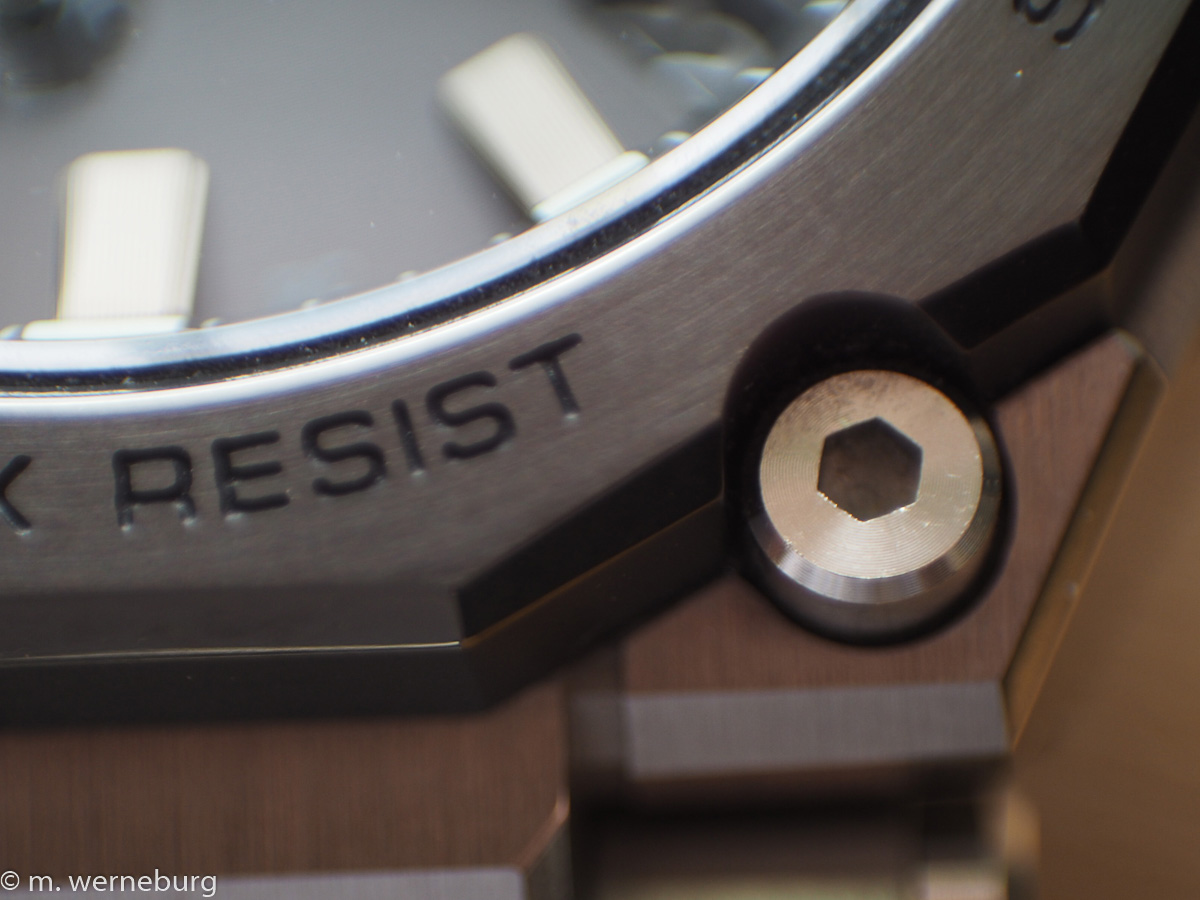 I'll get to the dial in a moment, but think the overall shape and size are worth a mention. I think the design process probably went something like this:

In the end, Casio has done a great deal to keep the weight down despite the size of the watch, the depth of the dial, and the amount of metal used in the construction. 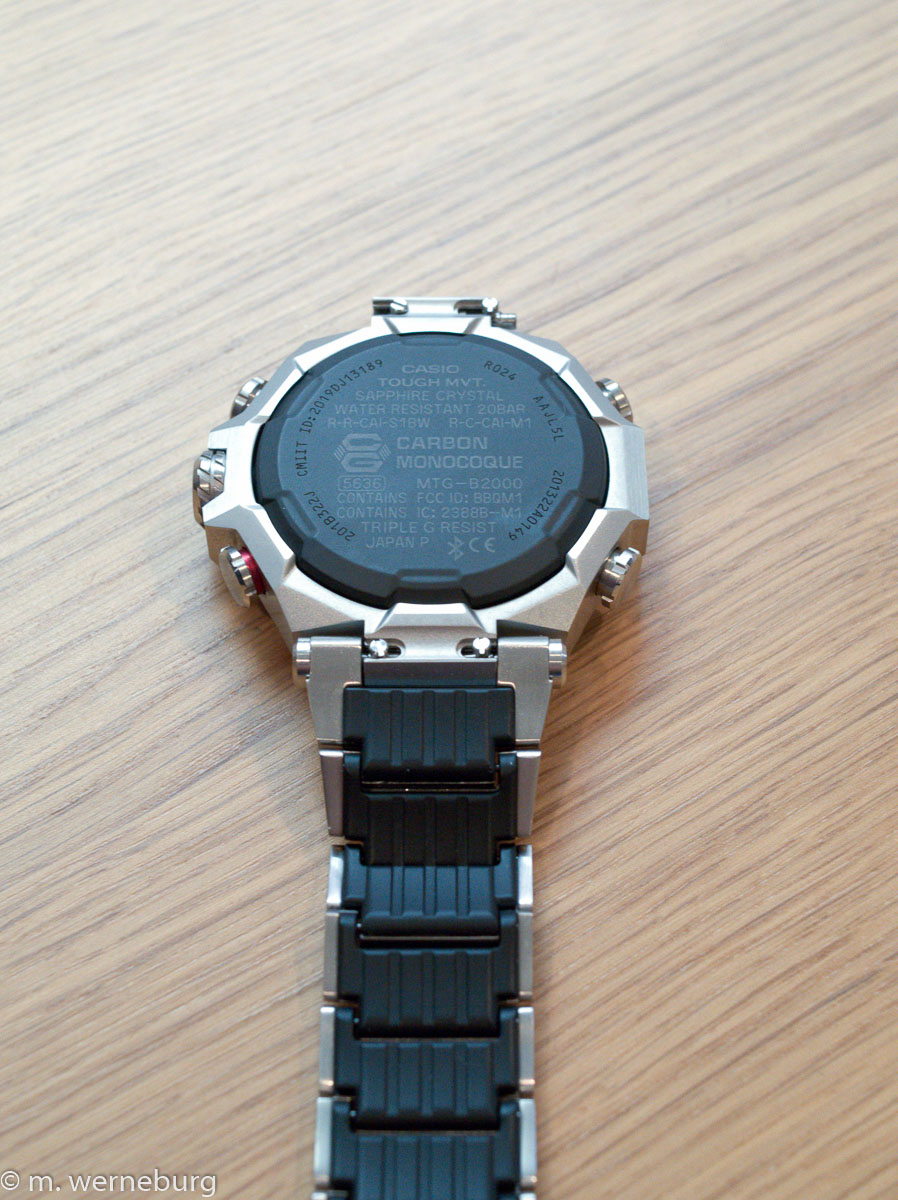 Here's the underside of the case

The dial has a lovely layout and I like the detail with some reservations. I've also encountered an unexpected learning curve with all that complexity after a lifetime of conservative mechanical or quartz designs or two-tone digital interfaces, which I'll get to in a moment. 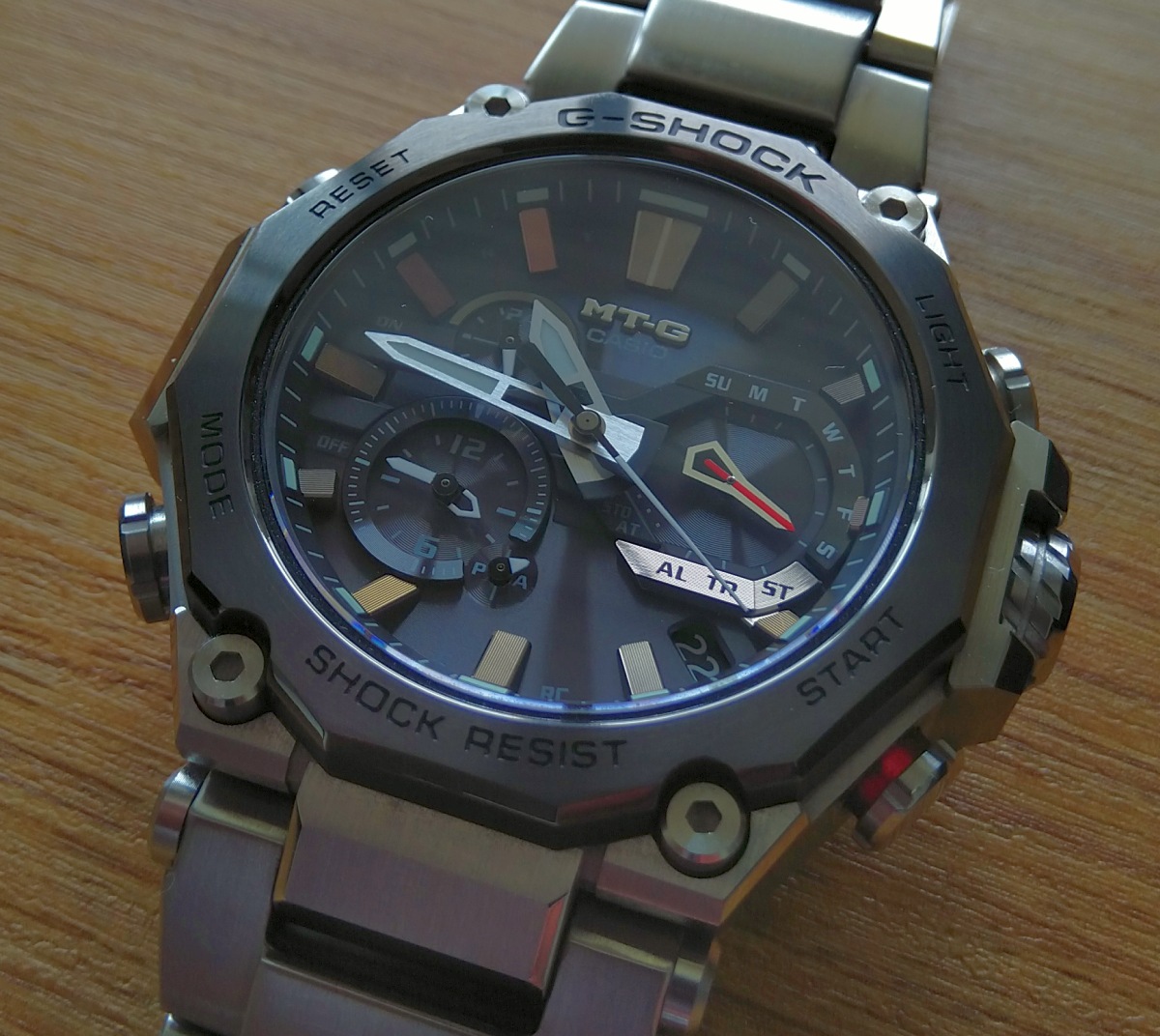 I didn't notice the dark shadow across the dial while taking this image; that's not a feature of the watch. But I like this pic for a couple of the things that it highlights, good and bad:

And then there are those hands: they are perfect. They're bright against a more subdued background, and they've got an interesting shape. The proportions between the hour hand and minute hand are exactly right - this feels like the golden ratio, I'll have to measure. The minute hand isn't scraping the edge of the dial the way so many watches have these days. The design of these hands is reflected in all the other hands on the dial (and there are eight in total!). You'll note some slightly rough edges to the hands in the macro shots; these are not noticeable in normal use. 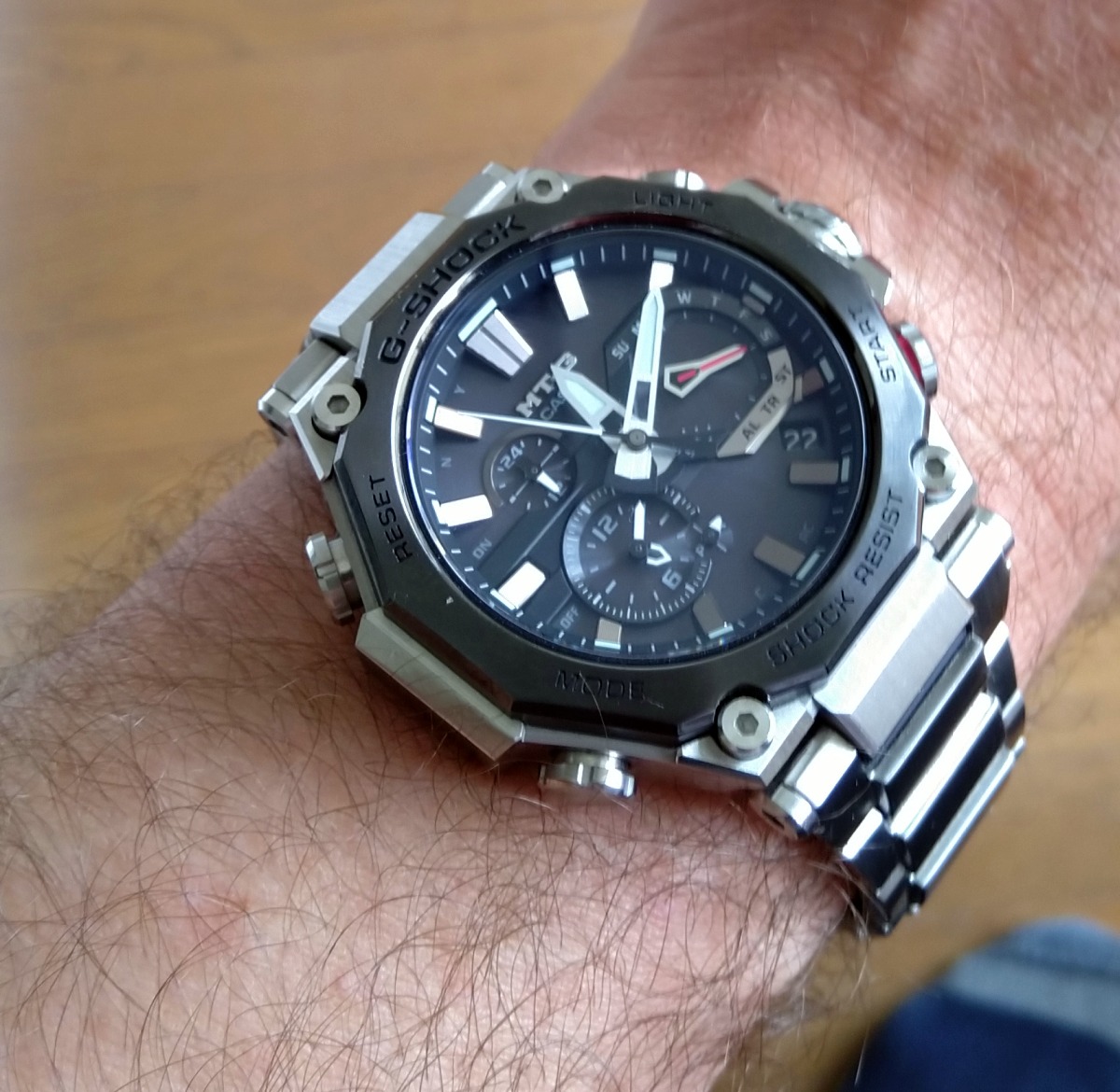 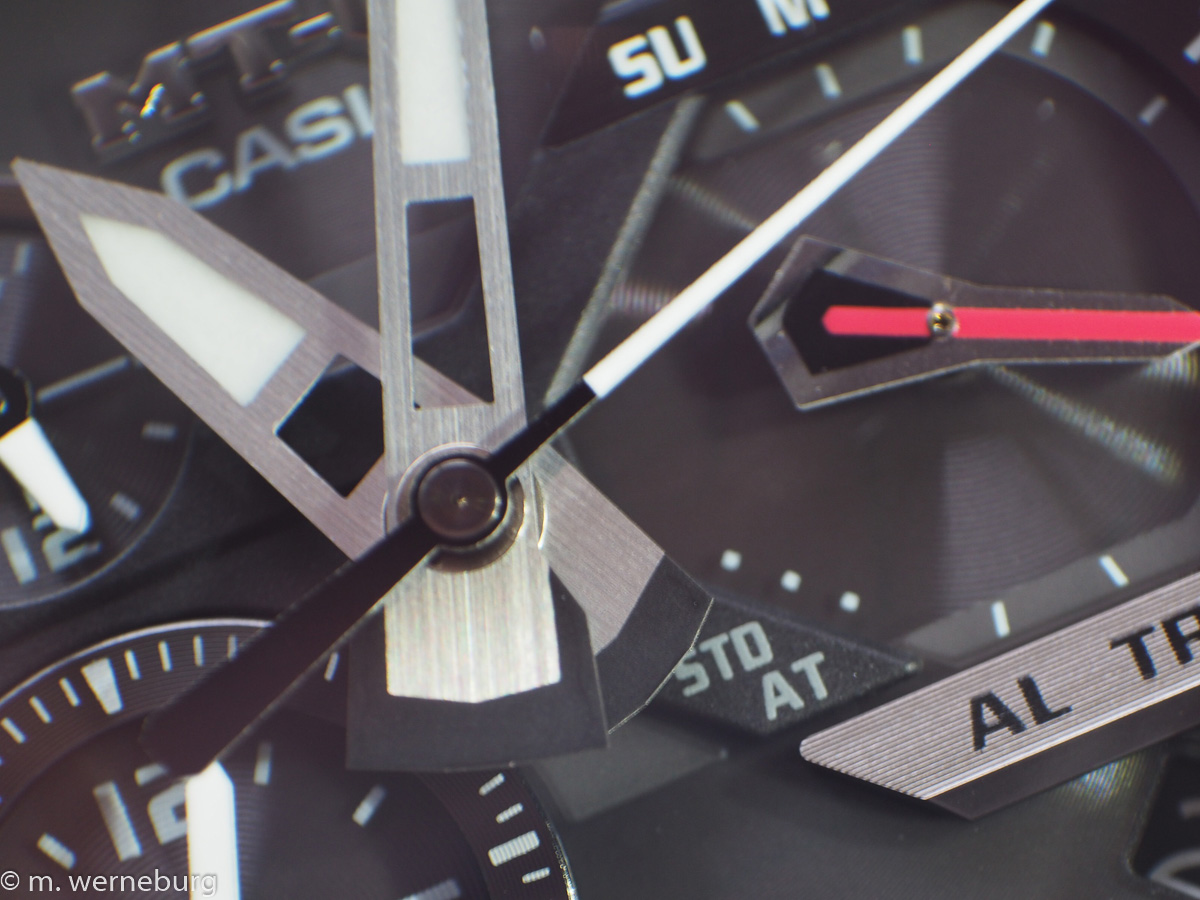 a busy dial up close

The dial has four complications. I think complications are necessary because without it the dial would consist of a sea of solar sensitive surface about the size of a dollar coin. 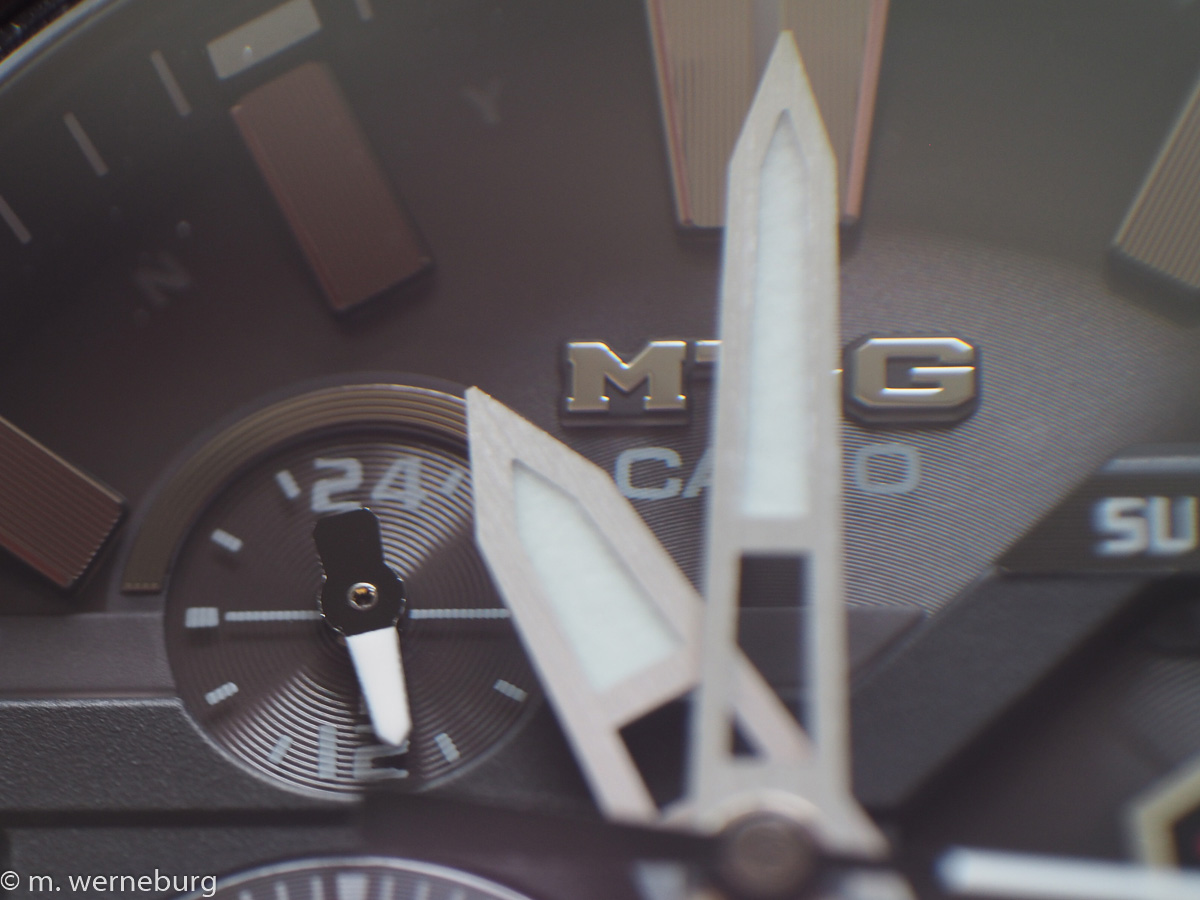 There's a date window at about 04:30 that is quite recessed. I find it legible enough but didn't notice it at first unboxing the watch. Immediately adjacent to this, spanning from 01:00 to 04:30 is a multi-function dial with the day of the week plus the mode indicator. As the image below shows, this dial has a red arrow-style hand that usually points to the day of the week. Spanning from about 07:00 to 09:00, there's a second dial complication with the "world time" in hours and minutes only. When you're in alarm-setting mode, this dial shows the alarm. There's a third, smaller dial complication between 10:00 and 11:00 that shows the current time through an hour hand only, but on 24-hour time. I get that this final complication completes the balance between the larger two sub-dials but I don't find it useful. And finally there is a tiny fourth complication on the rim of the world-time/alarm complication - an unnecessary AM/PM marker. 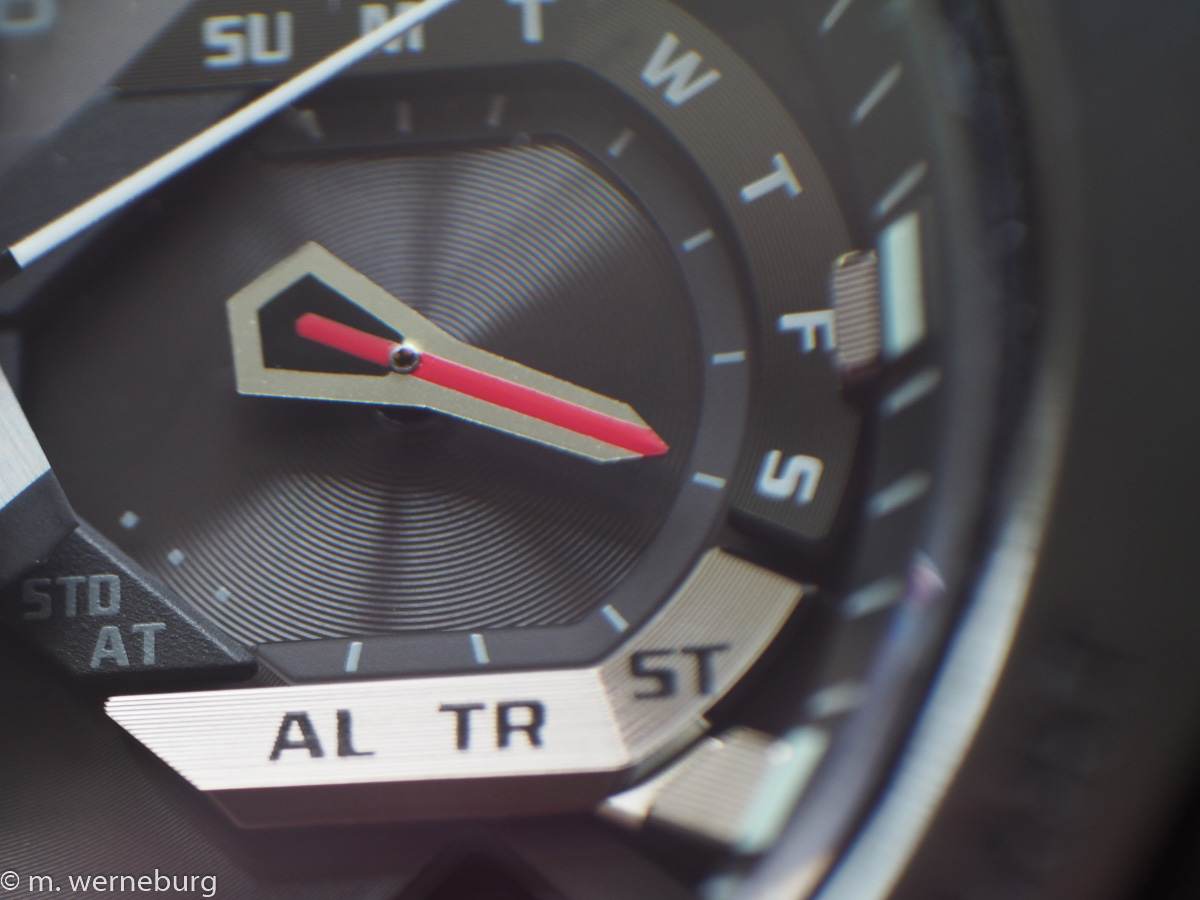 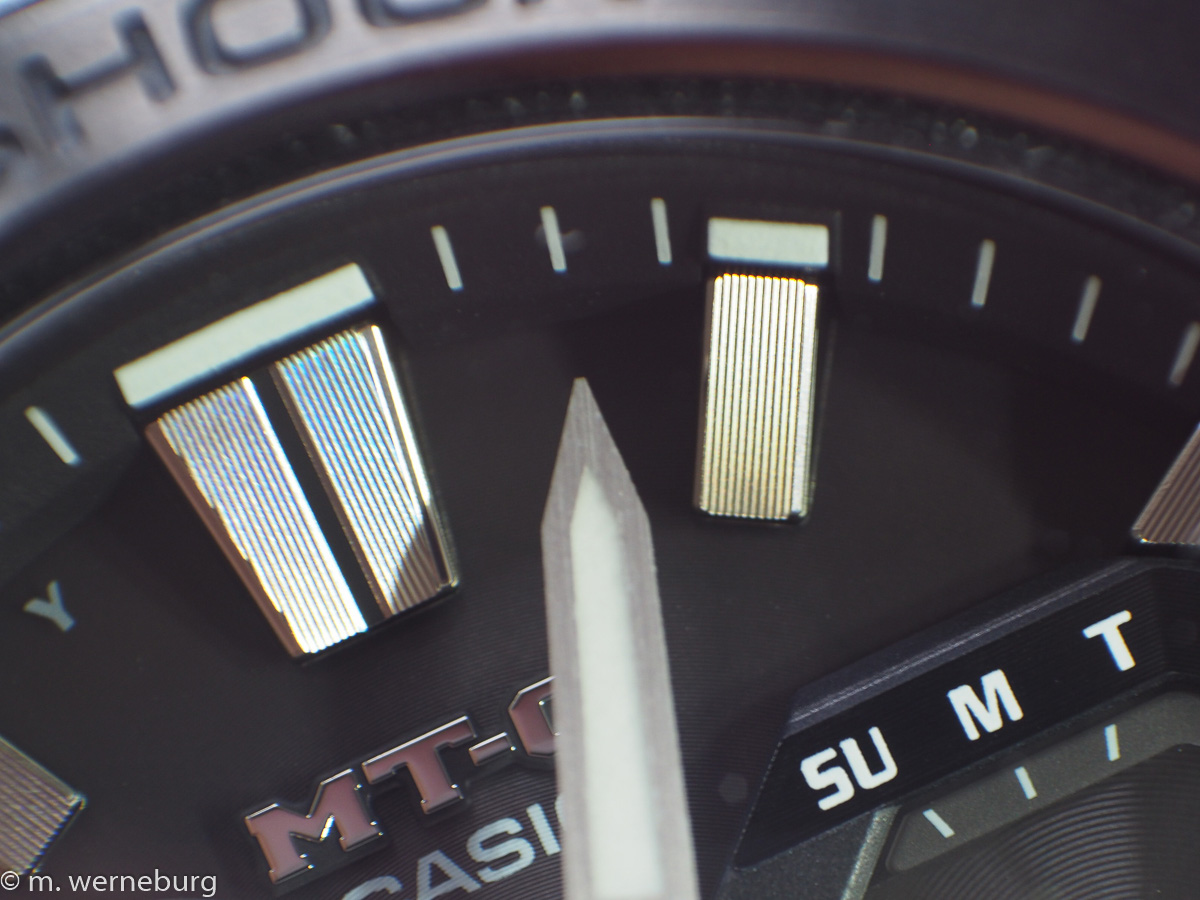 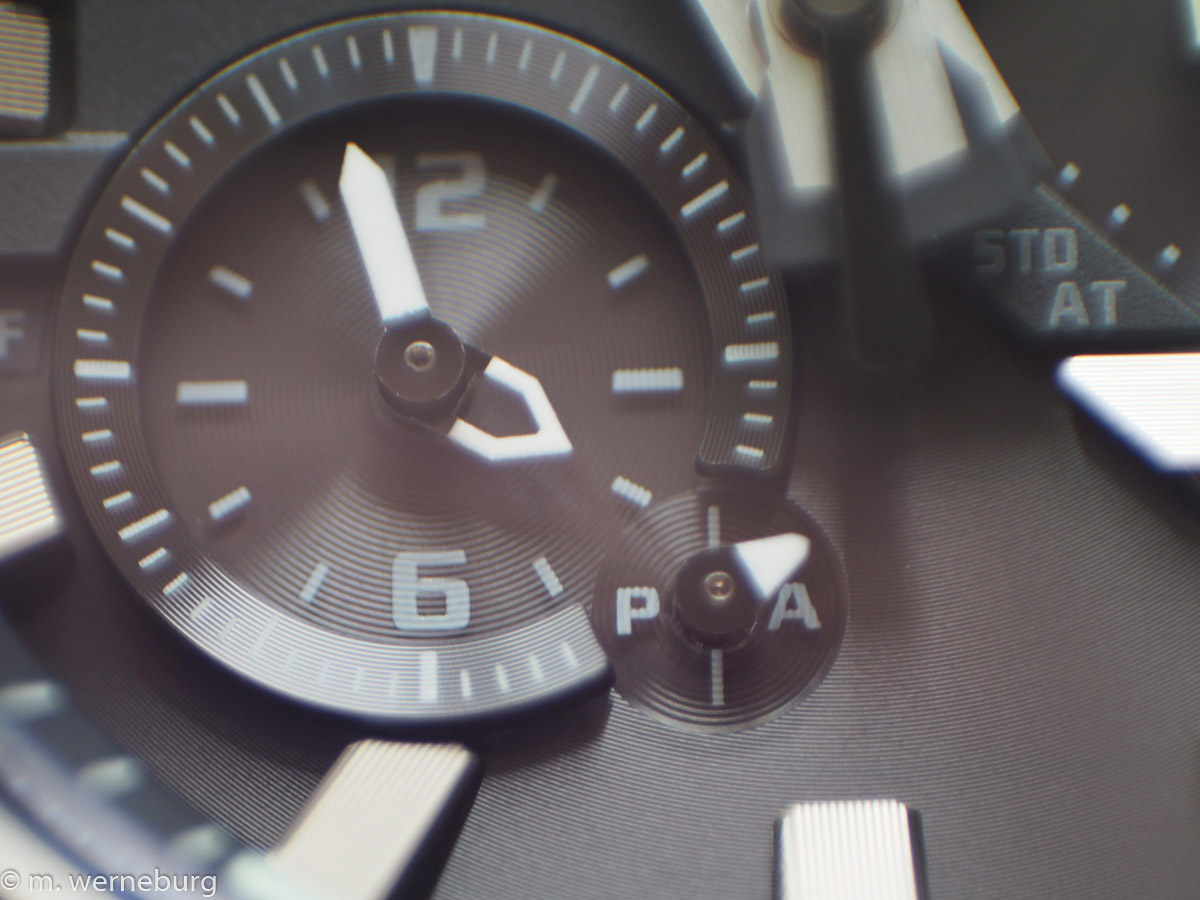 The learning curve for me was legibility in low light. I've made mistakes reading the time on this watch because in low light, and I think I've identified some design elements that are at cause:

On one occasion I was walking through the house when the only light was dawn overcast light coming in through the room via a double glass door at the far end. It looked clearly that the time was 05:30 when it fact it was about 05:22. I'd read the six o'clock index as the minute hand! I've also mistaken the second hand for the minute hand on one occasion when glancing at the watch at a very low angle. Perhaps I can put all of this down to my not knowing "double-domed" crystals and leave it at that.

But: some of Casio's other designs of late have shown that this octagonal design phase have definitely put legibility second. You'll see comments in watch forums and on Youtube about people not being able to read the time at all on the hugely successful "CasiOak" watch that likely inspired Casio to try this design in the first place. 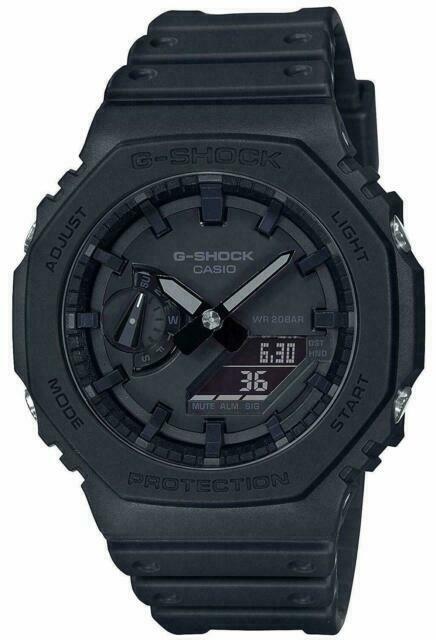 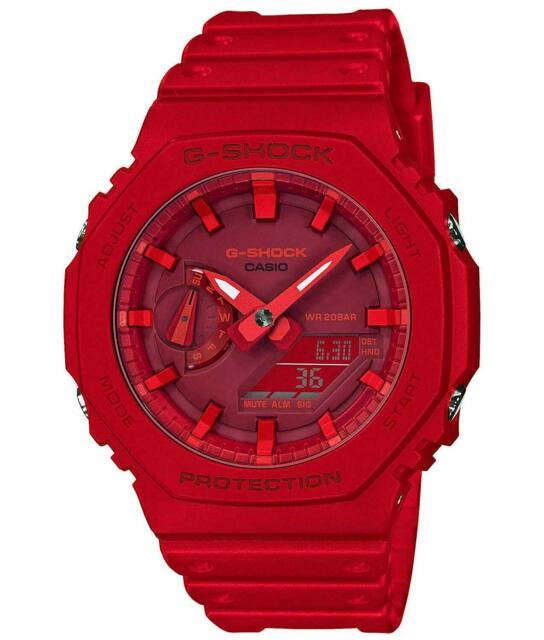 Neither of these is legible. Also, the digital element disrupts the design with its angles - why couldn't the digital window be round like the dial and the other complication? Or maybe somehow reflect the octagon that defines the case? In any event, Casio avoided these problems on the MT-G B-2000.

As a final thought I'll add that I don't think this watch needs a second hand. I get that there's a chronograph but the minute hand would suffice for that. It's not like this beast doesn't have the power to drive the minute hand at that speed - there are independent motors for each hand. Casio appears to do this with the AQ190WD-1AV, for instance. I would like to have a touch less depth to the dial and losing the second hand would be a step in that direction.

Here's an image of the inserts on the integrated bracelet. 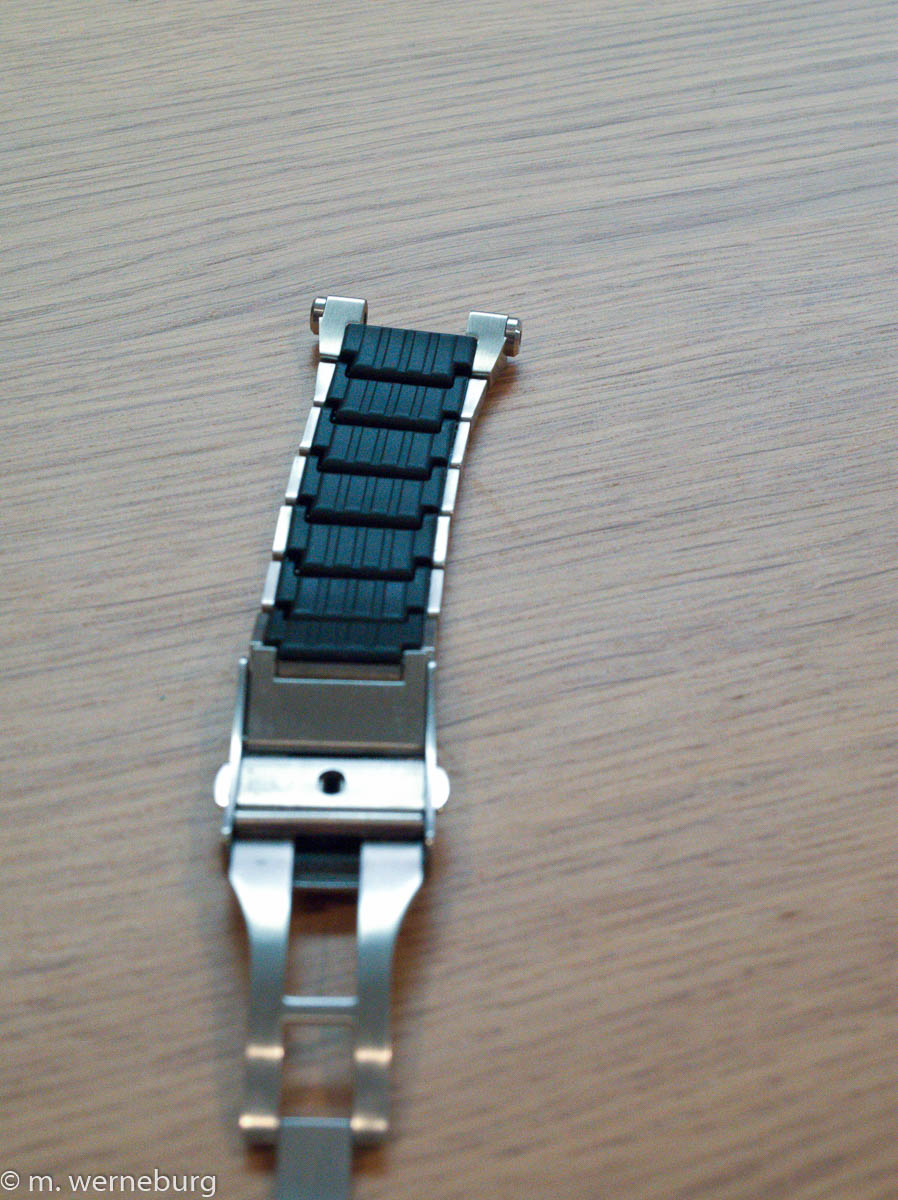 Integrated bracelets are another recent fad that I think Casio has executed well, here. The integrated bracelet is, I think, the only option for a case of this size and Casio's innovative two-material design makes it work. The bracelet is attractive, with bezels and a great deal of tapering away from the case. This compliments the size of the case very well. 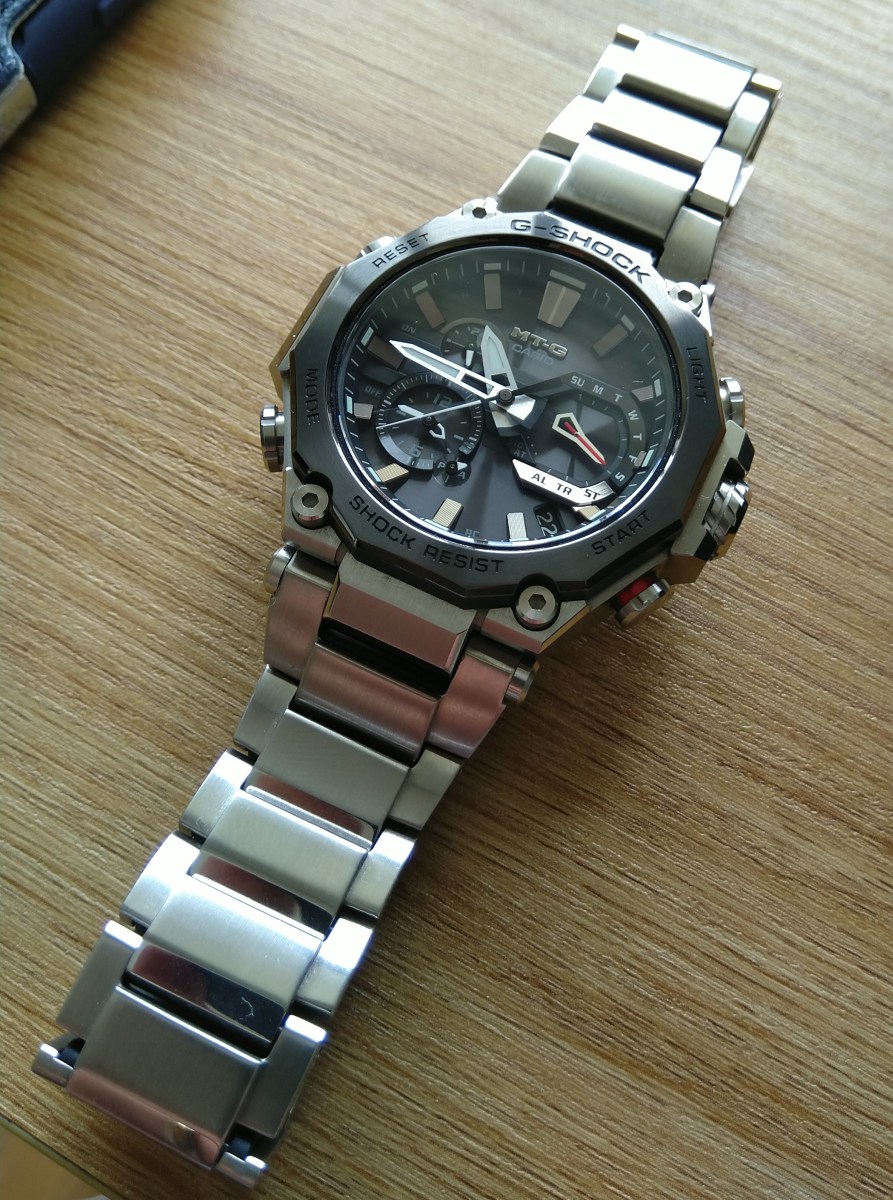 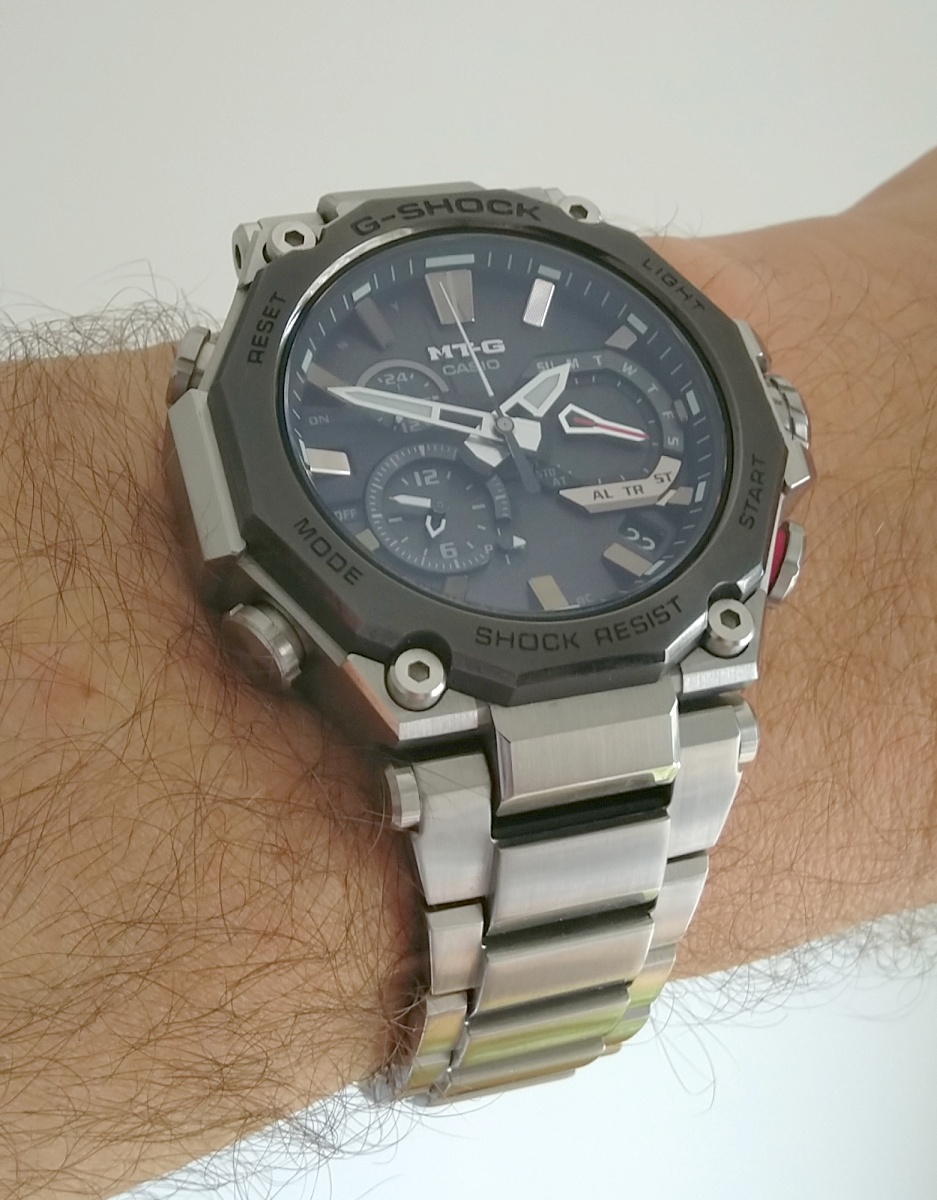 The bracelet is held to the case with a double-spring-bar that looks very strong but God help you when you have to put the bracelet back on. I found it quite a chore when removing the links and won't do that again.

I like the sound of the bracelet when worn just a bit loose. Rather than jangly it sounds a bit musical in my opinion. Perhaps it's the hollow links resonate.

I use the alarm daily. It's a classic Casio chirp that lasts about ten seconds. The light is strong and comes from a spot under/behind the chapter ring between the 05:00 and 06:00 positions on the dial. This side illumination lasts about three seconds and picks out the hands without the catching the complications. I like this. I wouldn't know what to do with the chronograph feature. 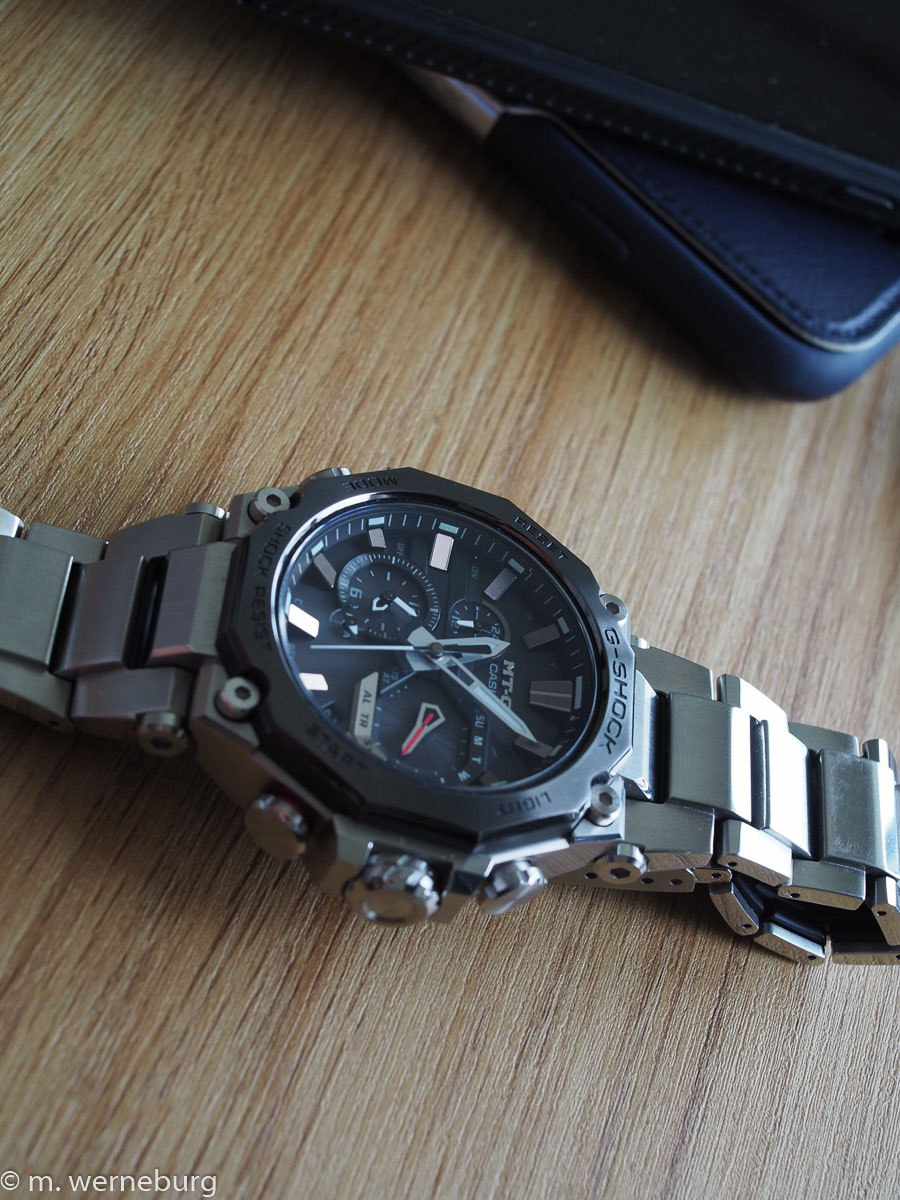 There's an app for this range of watches. It lets you do things like check the watch's status (things like battery health and time), set the alarm, and set a name for the watch in case it turns up somewhere and someone thinks to pair it with an app. I used my email address as the name of the watch. I suppose it must also have a facility to update the firmware. I used it to set the time and then let the radio reset keep it that way. After three months it's accurate to the second against a website I check from time to time.

The app means I haven't learned how to use the crown to set the time. Casio's deployed an innovative system here where the crown is used to tweak the position of the hands in steps rather than simply driving the hands around the dial like most crowns. I worked it out once, promptly forgot it, and now ignore it.

I really like solar tech, I think it's a fantastic idea and that everything should have solar panels wherever possible - car roofs, house roofs, empty exterior walls of buildings, empty lots in urban environments, you name it. I've had no issues with the battery remaining powered despite remaining solidly indoors during the endless pandemic here in Japan where the government seemingly is more concerned with the Olympics than with fighting the disease. That's more than I can say for my wife's much smaller Casio MS-G S500, which is currently sitting by a window for a recharge after the battery died in five months of similar indoor lifestyle.

This watch has a coherent, all-analog interface that avoids the jarring design notes of some watches from Casio. The solar panels that make up the dial are nicely textured and completely integrated. The bracelet holds the whole thing together (see what I did there?).

Here in Tokyo, Casio wins the count on any commuter train in a landslide. Large and small, there are more Casios (on mens wrists anyway) than everything else put together. Very few of these have the presence of this big metal watch with its contrast and screws and bezels. This is a watch that will get noticed! I could see it being something a certain type would wear to the office to dunk on their colleagues with less many hardware. I am very pleased at this clever alternative to my much more retro mechanical and quartz watches.

I don't know why there aren't any real reviews of this watch on Youtube, it's a marvel and it deserves more attention.

Once upon a time I bought a quartz fashion watch that the manufacturer disavowed.

I bought a beater Casio that turned out to be a fine watch – with a few warts.

Can a beater both be perfect and a disaster at once? Alba argues yes.

Only one who devotes himself to a cause with his whole strength and soul can be a true master. For this reason mastery demands all of a person.