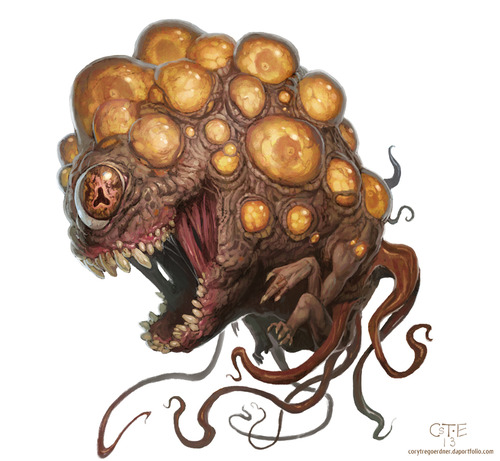 My game world doesn't have rust monsters or rot grubs or intellect devourers or other gotcha monsters, but I couldn't resist the idea of something that "eats miracles".

These appalling aberrations float about the battlefields, cities, and wizard’s towers of Sppang, consuming sources of magic such as magical items. First spotted in the chaos following the sack of the elven city of Zosk by the dragons, the mageiaphage are now turning up wherever magic exists. These floating beasts have an enormous cyclopean head with a gaping maw. They have only atrophied arms and legs, but also sport a host of ribbon-like tentacles. In each of the many prominent blisters on its back is a wriggling larva.

The thaumaphage can strike with up to four of its seven loathsome tentacle-like limbs per turn, causing 2d4 damage, but also draining any magical item it strikes. A strike causes a loss of 1 magical rating (e.g. a + 2 weapon becomes a + 1 weapon; a – 1 cursed weapon similarly loses its curse). This creature tend to attack one sources of magic with each tentacle – even attacking multiple opponents if they are in range.

Every successful “feeding” of magic causes one of the zosk’s blisters to pop, spawning a hatchling that grows quickly. Young zosk are capable of consuming magic within ninety minutes of birth. Zosk mageiaphage are immune to all magical attacks. They take double damage from bronze weapons.

They are strongly attracted to khyber stones, which they can sense from a great distance.

In one of history's more absurd acts of totalitarianism, China has banned Buddhist monks in Tibet from reincarnation without government permission.