These querulous giant frogs are the bane of underground adventure. They are typically encountered in some numbers, holding forth on any variety of subjects with equal measures of ignorance and certainty. And because they are perhaps the most pushy and demanding race known to Sppang, it is with some sorrow that they are acknowledged to speak the following languages with native fluency: common, dwarvel, elvese, gnolltalk, goblish, halfian, koboldic, undercommon, and the language of the pech. The poor, harmless pech. 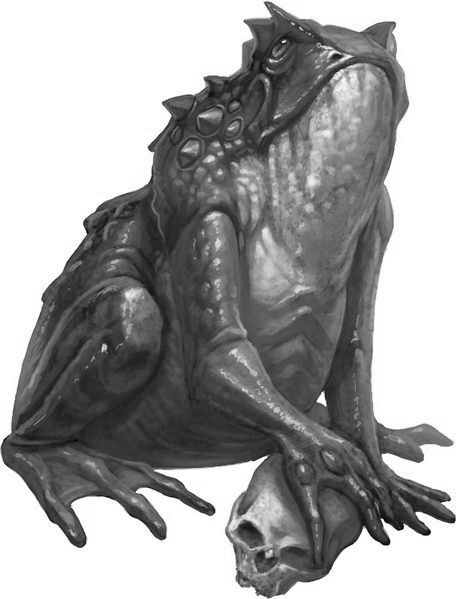 With their insufferable personalities and the threat of their literally poisonous tongues, ychnurc frogs tends to get what they want. And what they want is knowledge, which they trade dearly. Widely detested by any creature with the capacity for speech, these frogs have few friends but do a brisk trade in valuable knowledge and current news. Frogs found in their lair will have substantial wealth.

These frogs are tremendous cowards but will fight if pressed. If they strike a hit, the opponent must save vs poison or die in 1d6 rounds with the knowledge that the victorious frog will be crowing about it for decades to come.

Ychnurc frogs live wherever moisture exists in the underground caverns of Sppang and wherever the ambient temperature is above 15°C and below 50°C.

There is no greater fault than ambition, no greater curse than discontentment, and no greater sin than greed. The one who is contented with contentment shall always be contented.