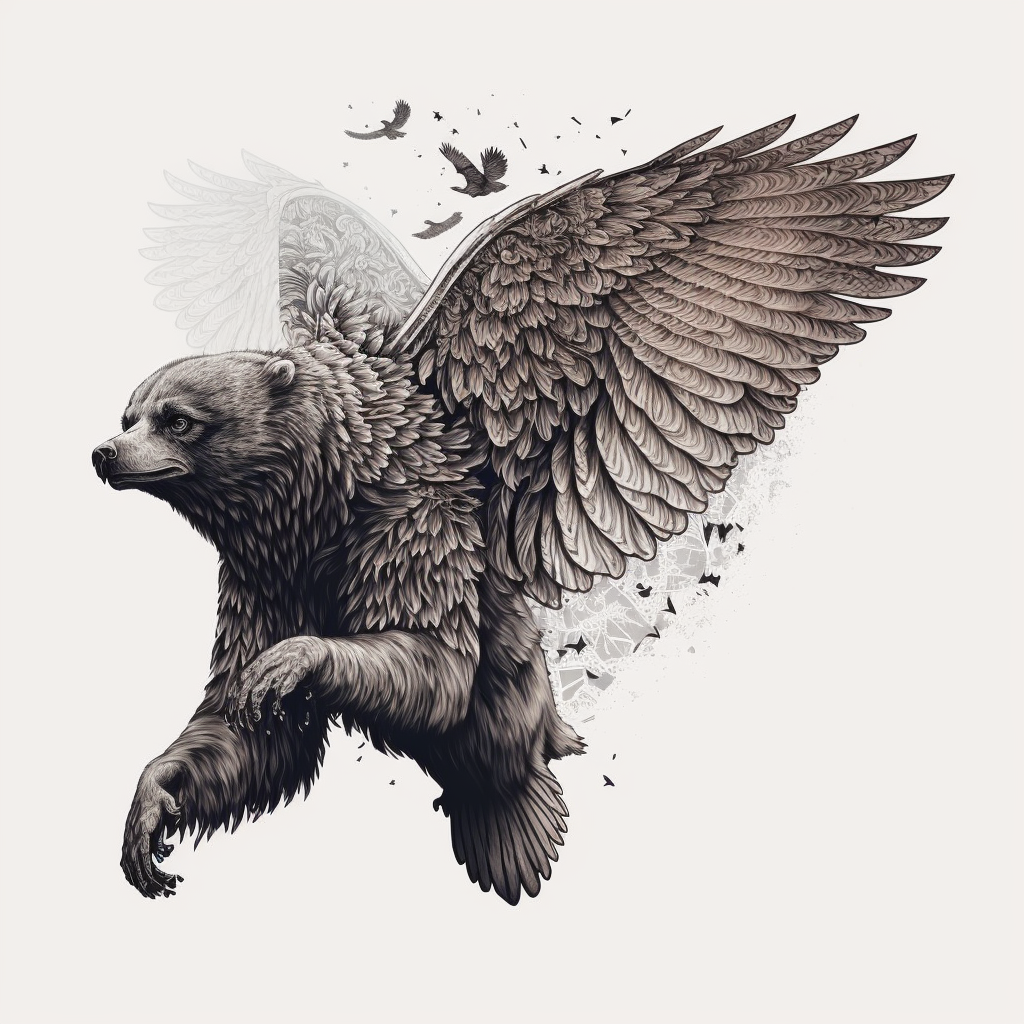 Forget what you’ve heard. The home-world of the owlbear is Sppang, where they occur naturally. In an ecosystem practically ruled by large voracious worms, the ability to take flight is an advantage even for bear-sized creatures. The owlbears of Sppang are bears shaped like owls: a nightmare cross between the two animals with a hint of some other source in the mix.

With their superb senses of sight and smell, it is virtually impossible to surprise these crepuscular hunter-scavengers. Far more aggressive and violent than bears, and driven by a seemingly limitless appetite, these monsters can easily be provoked into an attack even when young.

Owlbears are known to live in deep forests, rocky badlands, and subarctic tundra. They are prolific breeders and may fully occupy a new territory in a matter of a decade.

Young owlbears begin to fly within three months, but can climb within days. Frequently leaping from tree to tree if those trees are large enough (e.g. primeval forests), they can leap as much as 10m from a tree or 6m from the ground. A young owl bear leaves the nest at two years and joins a pack of others with the goal of establishing a territory.

Though slow in the air, young owlbears are capable of extended flying range and have been known to use high elevations like mountains to scour their territory for prey or carrion.

Just like bears, an owlbear may hug an opponent for 2d8 additional damage if it successfully hits with both paws in the same round.

A minority of owlbears survive the violence of youth. A full-grown male can stand as tall as 4m and weigh up to 400kg (larger than an adult polar bear by 1/3rd). Adventurers who have survived encounters with the creature speak of the harrowing screeching cries at deafening bear-roar volume, and the bestial hunger they glimpsed in those angry eyes.

Adult owlbears differ from their young in temperament and cunning, and by being strong fliers despite their considerable size and weight. Gliding above their temperate forest homes, they hunt deer, horses, moose, and any humanoids they think they can take. When hunting intelligent prey, they gauge their approach and time their attacks to isolate their victim.

Adult owlbears nest with a mate and offspring. One adult is usually out hunting at all times, but survivors have reported a primary hunter retrieving its mate to strike in tandem.

25% of adult owlbears speak a rudimentary form of Elvese.

Ancient owlbears have survived centuries of adulthood. These special creatures are immense, with wingspans of 20m. They tend to oversee a great region of wilderness populated by related families of nesting adults. Their enormous eyes let them see as far as ten kilometers, and their owl-like hearing allows them to hear a deer from 300m. They can lift a horse, and have been observed hunting bulette. They are utterly fearless.

Fully 75% of ancient owlbears speak, and 50% of those use magic as a 3rd level witch.

Ancient owlbears also have a breath weapon consisting of a cone of cold some 60m long and 15m wide at the end. This blast of 100km/h wind lasts three rounds, measures at -60°C and does 8d6 damage to everything in its path per round. This attack instantly smashing things made of glass or crystal and can warp anything made of metal (1-2 on d6). Owlbears have been observed directing this weapon during the three-round period and firing while in flight.

A number of keen observers have noticed that owlbear and dragon ranges have zero overlap. And that there are no white/frost dragons on Sppang.

I'm pleased and happy to repeat the news that we have, in fact, caught and killed a large predator that supposedly injured some bathers. But, as you see, it's a beautiful day, the beaches are open and people are having a wonderful time.