Kricklers are extremely rare, found in moderate temperate regimes. Appearing to be at least partially made of living rock, they are stocky humanoids of unknown lifecycle and purpose with little known contact with the outside world. They inhabit ruins and cavern systems of their own construction in the most out-of-the-way badlands, cliff-faces, and rugged ravines. While not an expansionist or aggressive species like the gnolls, kricklers have a similarly militaristic outlook and discipline. They do not tolerate any incursion into their territory, and will attack with sophisticated tactics and techniques. Their tactics include shaping the land to corral intruders in dead ends, surrounded by rocky outcroppings or cliff faces and then dropping rocks which they stockpile. They are known to set traps with considerable skill. Kricklers tend to keep guard creatures such as sandlings (55%) or even the dun variant of xenomorph pudding (15%) which ignore the silicate kricklers as a food source and enjoy being fed anything that irritates the kricklers. No krickler children have ever been observed. 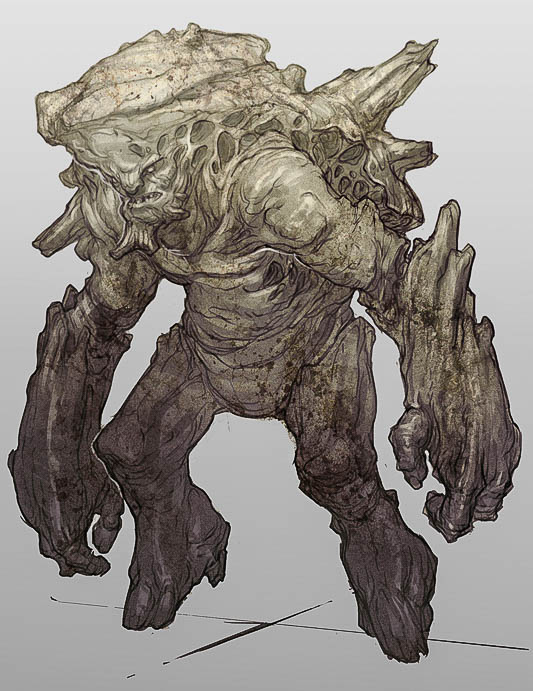 In melee they tend to strike with a bare-handed attack that grapples; on a successful hit, they pull the victim into a crushing embrace that saps 2d4 STR per round unless the victim is somehow freed. A victim reaching 0 STR is of course exhausted and collapses, unable to move. The kricklers will no longer molest the victim. Their pets, however... Kricklers are not actually made of rock, but have very dense flesh. They bleed a bluish fluid and take all normal forms of damage.

Kricklers have been observed to follow a Blue-and-Orange Morality - that is to say a morality that is alien to the societies of other humanoids. It is thought that the krickler stops short of killing with its grapple-and-hold attack simply because the 'threat' posed by the victim is neutralized. They do not value reciprocity or fairness or compassion but make judgments based on criteria such as whether a course of action will result in more kricklers, more homes fashioned, or how true another krickler "came out". They value well-made subterranean living spaces and work tirelessly on them.

This monster was co-designed with my son, then aged seven.

(DM's note: a krickler settlement is started when a krickler is born from the clay-like droppings of a grey worm. Once born, this small solo krickler wanders Sppang until it finds a suitable spot to start digging. This it does with its bare hands, slowly pounding at the rock until it has excavated an inhabitable space. It then fashions clay out of the excavated material and through an unknown process causes another krickler to come to life. When in proximity of one another, kricklers do not roam but instead continue excavating and reproducing.)

A leader is best when people barely know he exists, when his work is done, his aim fulfilled, they will say: we did it ourselves.