Fire salamanders are eight-meter-long predatory amphibians, low-built and a muted crimson in color. A beak-shaped head sits on a long, thick neck, and the whip-like tail makes up fully half the body length. They have a pair of flexed horns that run back and up from the skull. Short but powerful limbs suitable for swimming sit aside the long lean torso. Black blade-like spines stand out of the vertebrae of the back and tail, these are matched with partial bands of black. The head, horns, and legs have partial bands of the same sort as the body.

These hardy creatures hunt fish and otters in the rivers of Sppang. They live in pods of 6-8, with each pod defending its hunting territory from other salamanders and any intruder large enough not to be eaten. 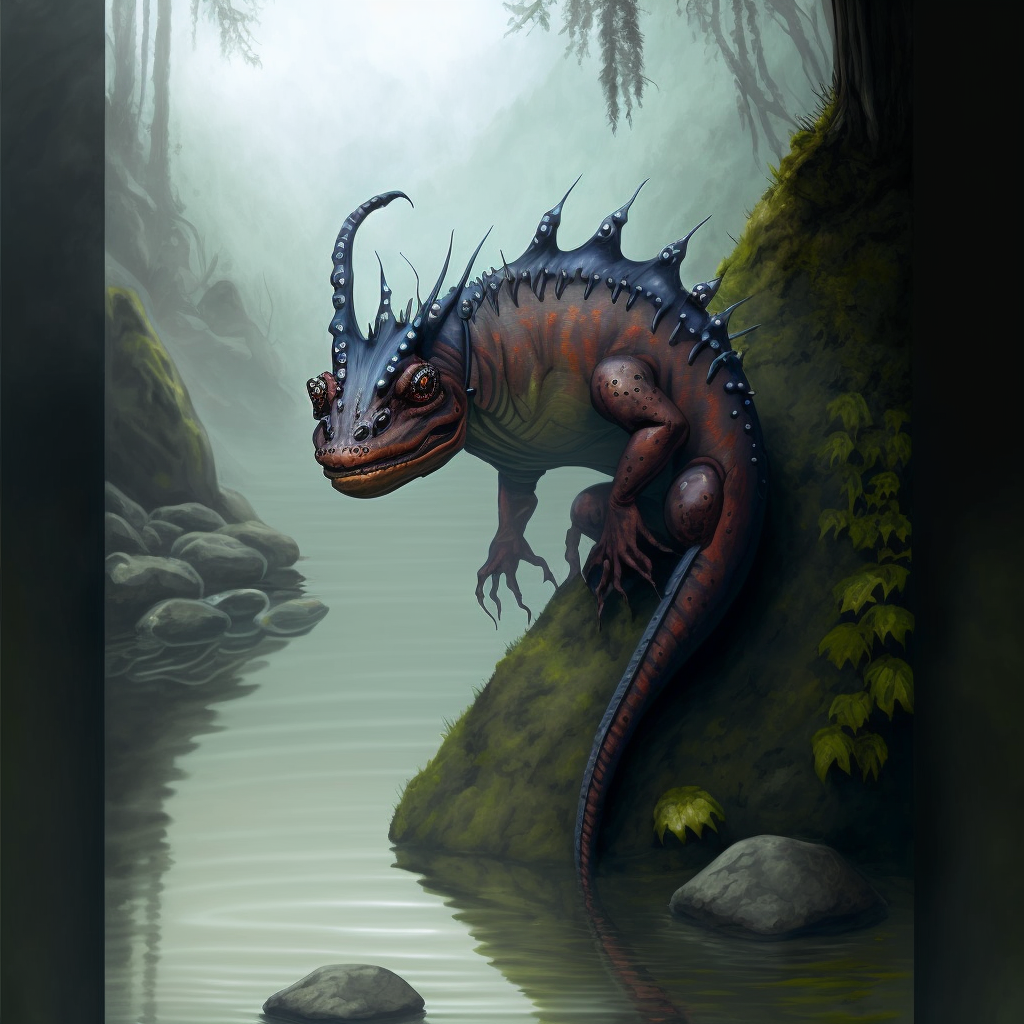 Oh, you're heading to the castle? Sure, it's tucked up there in the hills. You'll know you're close when you see all the cattle carcasses.

Fire salamanders speak Elvese and Common. And that’s where the trouble starts.

Tricksters: Fire salamanders are notorious liars, tricksters, and schemers. They are known to lead adventurers on wild goose chases, send them into trouble, or convince them of erroneous facts. They’re happy to defraud humans, robbing them of wealth that the salamanders don’t even seem to need or use. And while they sometimes profit in the misdirection of adventurers, most of the time they seem to be doing what they do for lulz.

Combat: These salamanders are talkers, not fighters. But they have a poisonous bite that – while rarely lethal – causes paralysis in humanoids that lasts 12 + 1d4 hours. Any successful bite can transit this poison. While they see poorly, they have a tremendous sense of smell that enables them to detect the approach of wandering humanoids on 1-4 on d6. Additionally, fire salamanders may use their long tails as a whip, creating a shocking cracking sound to warn other salamanders. Up to three times a day, they can use their tails to destabilize bipedal opponents. A successful strike with the tail (which the salamander must elect to do instead of biting) will knock down a humanoid of less than ogre size that fails to roll its DEX.

A fanatic is one who can't change his mind and won't change the subject.