teaching your kid to ride a bike

I've now taught both of my kids to ride a bike. The second child (The Girl) benefited rather a lot from my learning from teaching the first (The Boy) several years earlier. First borns really do have it tough.

When a colleague asked for my recommendations because his kids were struggling, I shared those comments on our internal slack channel. I've now expanded upon those thoughts and shared that with the world. 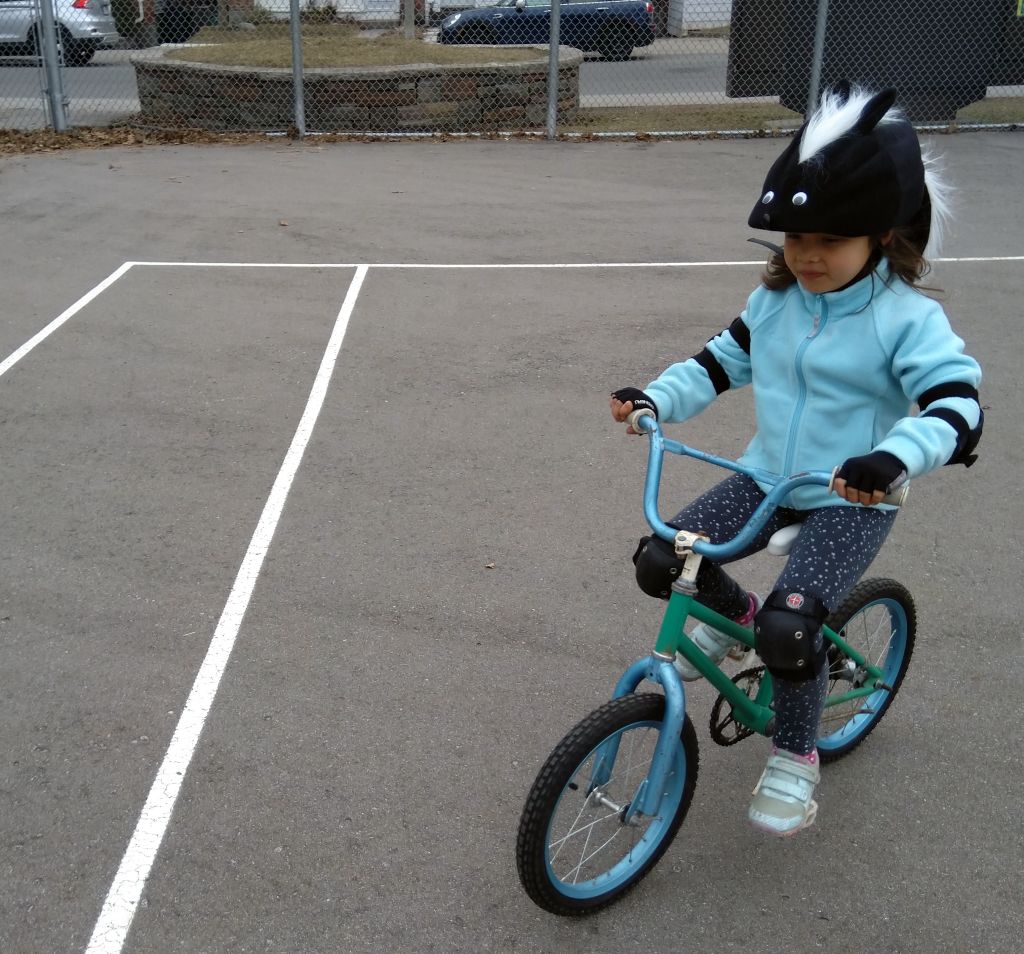 The Girl, riding a bike at last

A few weeks before our daughter turned seven, she was suddenly bitten by the bug of cycling. Perhaps it was because it was spring and the weather was getting nice (by Toronto standards). Or perhaps it was because she was the only one among her friends who couldn't ride.

That she couldn't ride was due to her not bothering to really try in previous years, and due to her indolent father readily seizing upon her reluctance in order to ignore the situation. I kid, I kid: I didn't avoid helping her. As anyone who knows me could guess, I got irritably impatient. Which I'm sure just further drove her away from it.

Whatever the cause, she's gotten into it quite a bit later than The Boy, who was on the verge of riding independently at 4 1/2 when the bright and cheery early October of southern Ontario turned into the horrors of pre-winter late October and his riding came to an end. My point here is that all kids will learn at their own pace, and it behooves the (lazy) parent to not swim against the river as it were. I'm sure there's a quote from The Buddha to that effect.

I was delighted that she was finally showing an interest (though irritated that she wanted the training wheels off when she'd only asked for them about two rides prior). I took her to some tennis courts that have a nice smooth surface (and this being early April in Toronto, no tennis players). This was probably The Girl's tenth or so attempt at riding, but she seemed unusually sure that it was going to be fine, and that she wouldn't need the training wheels.

She was right. Within two hours she was riding with confidence at a good speed, having only fallen twice along the way. I taught her the mechanics and held her arm and helped through a dozen false starts. When she was moving a little better, I let her start with a gentle push, then no push. Then I announced that I was giving her five seconds, and that I would chase her and catch her.

To summarize, I set her up and then pushed her to take each successive step as things fell into place. I also didn't let up, because that had prevented us from making sufficient progress over the previous two summers.

The only mechanics you have to teach are to make sure one pedal's up, the other foot's ready to kick off, and after they've got their foot on that top pedal to keep their head up. I sounded like, "Keep your head up, keep your head up, you don't know if you're balanced or where you're pointing if you're looking at your feet." The kids will figure out how to balance by themselves. Thanks to fear, stopping needs to be pointed out only once.

And finally, I think it helped that The Girl's mum and brother were playing table tennis nearby. She could yell to them about her success, and was in no mood to go back. Looking back, she was always so glued to her mum that it was no real surprise that my earlier attempts at teaching her hadn't worked. Being out with dad was fine, but this kinda felt like work and mum was nowhere to be seen. So, why bother.

So now that that's out of the way, let's get down to dad stuff: the gear! 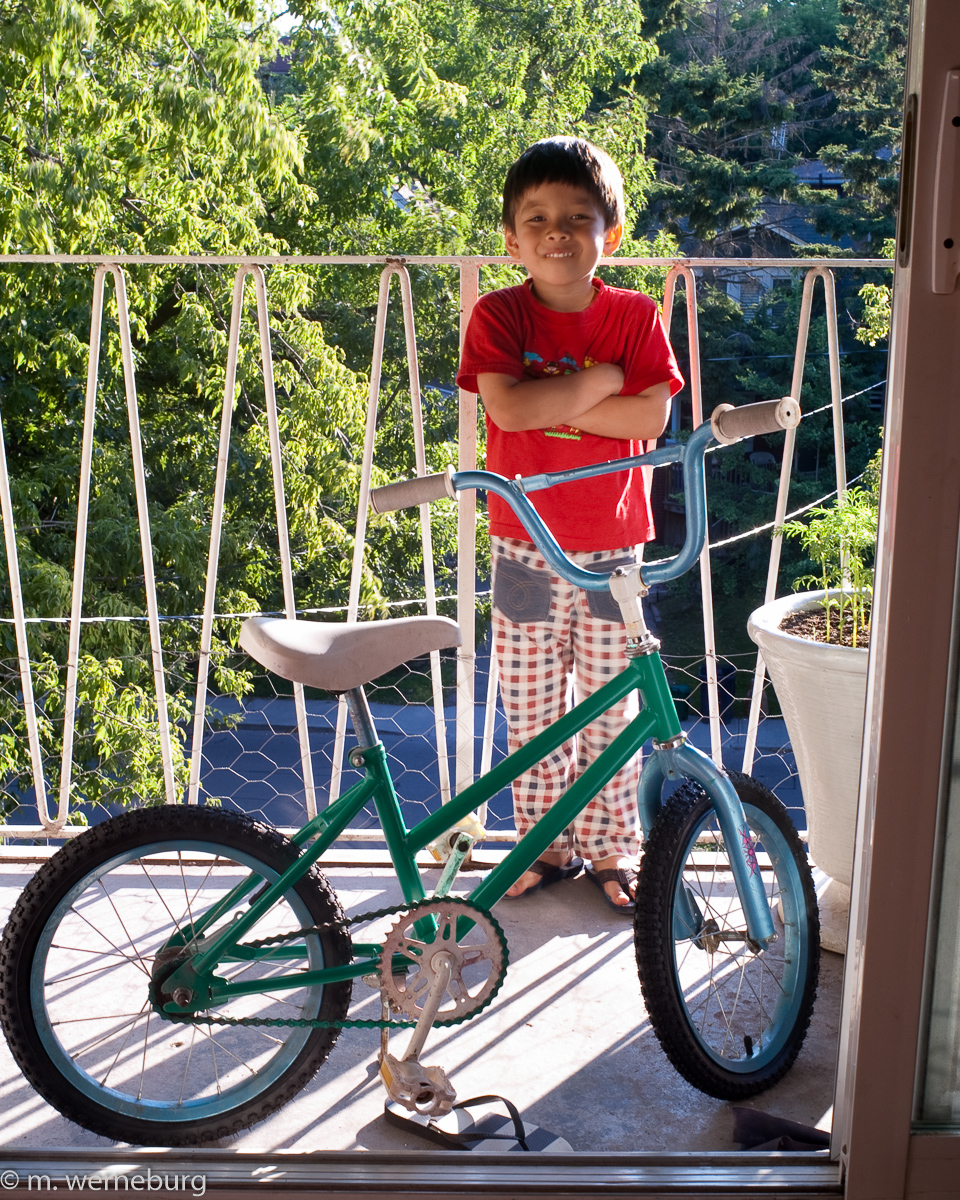 But seriously, it's not all about gear. The first major ingredient is patience: the kids won't want to start until they're ready, and they won't stick to it until they're motivated. It doesn't matter how many false-starts and slow-motion falls the kids have, that's the gig man. You have all of those ahead of you no matter what, so get through them.

Here in Toronto they are in no way fooling when it comes to regulating bike riders. Everyone needs to ride a bike a) in good working order and b) with a bell. A kid riding without a helmet is a $265 fine. The laws around cycling in this city are on the ornate, but this should come as no surprise in a city where street hockey is banned and even tobogganing was banned until the seventies. All of the details are available here. But that's my city, yours may differ. Get your kid a helmet no matter what you do.

My job has convinced me that life is a stale joke with no punch line.