A lovely little box with a gem of a lens 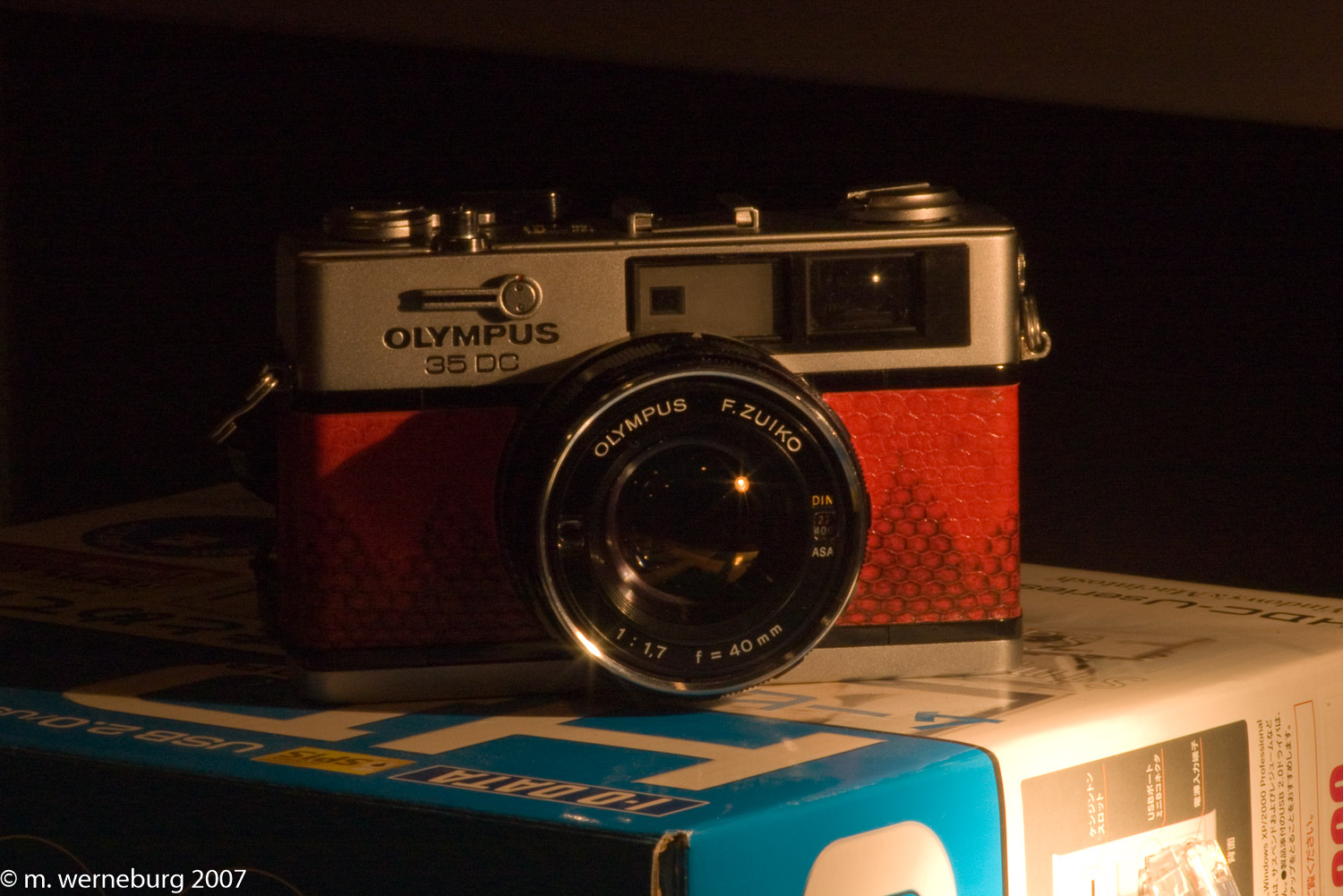 The Olympus 35DC is a simple camera from way back when (it's of the same vintage as me!). All it offers is the ability to (manually) focus the lens and click the shutter release. The simple meter is used to set the aperture and shutter speed. The shutter snicks open and closed with a tiny sound. Then you advance the film.

It's a simple point-and-shoot, no different in complexity from countless others. What sets it appart from the usual point-and-shoot experience are these:

It also supports accesories like a flash, filters, and hoods, and supports all the usual standard film speeds. It's also got a back-light override button, but I find it best left alone. But that's essentially it.

My 35DC has quietly become my grab-and-go camera when I'm heading out on the town to do errands or meet someone. The 40mm lens has the perfect field of view for street photography, and the lens is both very sharp and very good at extracting depth—I find that images made with the 35DC have that three-dimensional feel.

A meter is one of the strongest points of a camera. I find the meter in this model to be surprisingly effective under most circumstances, and have had some really amazing results with my beloved FP4 film. Yes, it does best with low-contrast scenes. But I suspect it's been designed to overexpose slightly when under mixed-lighting conditions: it does a fine job of extracting detail from shadows at such times.

I've been really impressed with the lens on this camera. It's got great bokeh, and the colours and shapes are very true. I can't recall getting a lot of lens flare with this lens, either—but that may simply be because sunlight has a lot of difficulty getting through in Tokyo where I use it!

This thing is small and light, and feels great in the hand. Its balance is a bit odd—especially if you use it with anything as bulky as a lens hood—but it's an easy weight to heft when you want to quickly snap a pic.

Good as this camera is, it's just a point-and-shoot. There are no interchangeable lenses. There's no meter control. It has no timer or viewfinder information or depth-of-field preview.

There are also no way to set the aperture or shutter speed. Everything is done for you depending on how much light the meter receives.

A rangefinder camera allows focus control by presenting two views within the viewfinder. You can tell when the view is in focus by lining up the two images so that they merge seemlessly into one.

It's a simple principle, but for these old cameras age and wear are working against the user. In fact, I seem to be the only one who can use mine—everyone else either complains or can not get the thing to focus properly. One interpretation of this could be that such esoteric cameras are really for "camera people" rather than general users. Hobbyists.

For some reason, film speed is selected by turning a ring set inito the lens barrel. You have to extend the lens barrel all the way, then carefully turn the ring. The ring is halfway buried in the barrel, and turning it is a chore. I don't know why this design was used, but I've seen it deployed in quite a number of inexpensive rangefinder cameras of the era.

The camera won't let you take photos under light conditions that it considers too low. I work around this in two ways:

I don't consider this a necessity. I know that it was done to prevent inexperienced users from underexposing their shots, but I like taking available-light photos, and it's quite impossible with this camera without doing silly things as above.

So I'm forced to use this camera almost exclusively for daytime photography. It's not the end of the world, but I'd suggest that more-experienced users look elsewhere unless they can tolerate this limitation.

This camera was originally designed for mercury-based batteries that no longer exist on the market. Happily, there is a replacement in alkaline batteries such as the V625U and LR9. bYou can also do as I have done and buy an adapter for the use of of modern button-cell SR43 batteries. I bought my adapter from a local firm that manufacturers them here in Tokyo. I'm afraid I don't have a model number.

I've discovered that there are actually two versions of this camera. Both have the same model name, I do not know how to distinguish between them (e.g. serial number range, different markets, etc). I'll briefly describe the differences between "mine" and the other version.

Unlike the model I describe above, the battery-check version has no overide for the low-light limiter. This is a recessed button set into the base of the camera. It is an wide rubber-plastic thing of offwhite colour that is (dangerously) close to the release pin for the film rewind.

As a trade off, perhaps, it has a battery check on the back of the camera, just below the viewfinder. I've always found battery check buttons fairly useless, because a camera that needs a battery ti operate will tell you when the battery is too low—it just won't operate! But I suppose they can be used to predict when a dying battery is longer producing the right voltage.

Live each season as it passes; breathe the air, drink the drink, taste the fruit, and resign yourself to the influences of each.