A fun and versatile camera from the 80's

The 80's was the period in camera technology when all-metal construction gave way to plastic bodies and electronics. An early example of this was the award-winning Minolta X-700, a camera that stayed on the market for nearly twenty years. That's a long life for an electronics product, and there's a reason. The X-700 was an inexpensive and useful camera that encourages photography.

An X-700 allows newcomers to put the camera and lens in "P" mode and let the camera do everything else. This extends to compatible flash systems as well. In short, this camera allows you to automate everything but the focus and the film advance.

The controls are all very much self-evident with this camera, as well. There's no menu system on an LCD and no tricky button combinations. It's all manual and all laid out very well—very much the opposite of today's DSLR's (which typically have a user interface more reminiscent of a photocopier).

The viewfinder is a big bright one with a lot of information laid out in a logical fashion. This camera spoils the user.

The X-700 also has the standard aperture-priority and manual exposure modes, as well as a flash sync speed and bulb. It's got two exposure override features (a lock and a manual adjustment of +2/-2). It takes a wide range of film speeds. And it supports an enormous collection of lenses and other peripherals. It was designed as a "camera system" rather than a standalone camera and many of the peripherals can still be found (cheaper than ever, in some cases).

So once you've outgrown simple "P" mode automation, you'll find yourself able to take yourself a lot further with this versatile tool.

I've had only one problem with my two X-700 bodies over the years. This is a well-made camera (don't let the made-in-China label on later models give you pause, Minolta was known for excellent camera manufacture and they kept the standards the same at the Chinese assembly line). The one problem I encountered was both a simple and cheap fix—in part because Minolta sold so many of these cameras that the parts and repair expertise are not uncommon.

I have used both Minolta and Pentax bodies and feel that this model was the best-built and most dependable despite the many features.

This inexpensive camera has not only the exposure overrides mentioned above, but a depth-of-field preview, timer and a cable release socket. Again, there are plenty of extensions available such as grips, motors, data backs, flashes, etc.

The program mode is great for beginners.

I've used this camera on mountain hikes; in the Australian outback; in the south Pacific; in rain forests; on long cycle trips; for portraiture; with infra-red film (for which it is really suited); with reverse-mounted lenses; in the rain; in sub-zero weather (for which I will admit that its battery-dependence is not well suited); and in terrible snowstorms. I took it on the road for a 19-month journey. I found that this camera not only stood up to all of it but came to feel like an extension of my hand—it's an easy camera to appreciate because all of its functions just work.

The meter in this camera seems a bit limited. As my understanding of exposure grew I came to understand that the camera was giving me inconsistent results. I put this down to the meter, though I never entirely figured out where it was going wrong. I lay the blame with the meter, however, when I started to use the Minolta XD (with the same films, lenses, flash, etc).

It seems to me that the X-700 tends to underexpose, and the results get less predictable under low-light situations. To avoid this, I suggest two things:

One note: I've used a variety of infra-red films with three film bodies and found the X-700 to yield the most consistent and appealing results.

The camera's external body is largely constructed of plastic, and doesn't look like the dependable and versatile tool that it really is. If you care what people think of your gear, this isn't the camera you want to carry around.

You can by replacement leather for it, though—I found that replacing the default faux leather helps considerably, as below. 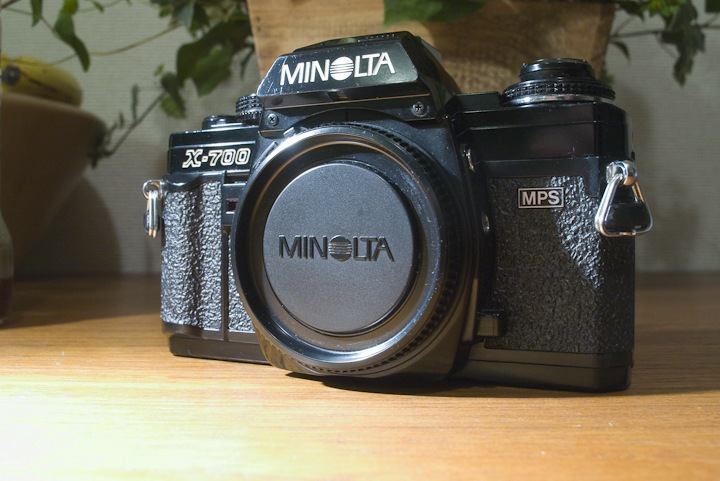 The best way to get most husbands to do something is to suggest that perhaps they’re too old to do it.