The Minolta XD is a manual-focus camera from the 70's. It's been my favorite camera since I bought my first XD body back in late 2003 because it gets great results and it's a downright joy to use.

When it was introduced, this camera was the top of Minolta's X- line, and a competitor to such famous models as Canon's A-1. Minolta's ambition (partnering with Leica in this design) seems to have been to attract the serious-amateur market (if not the odd pro), and they assembled a product that was at once easy to use, supported by great features, and even great to look at. The XD was the first to provide both aperture-priority and shutter-priority modes in a single body, and was backed up by a state-of-the-art meter and an able shutter. As a result, it's a highly versatile tool that takes the user along way to pleasing results with a minimum of hassle.

Five years after buying my first body, I've bought a second on the strength of my respect for this camera. This remains my go-to camera, above even my digital SLR.

Briefly put, this camera has four chief benefits for a hobbyist photographer: flexibility in exposure control, controls that are well placed and easy to use, accurate light metering, and an all-in-one view of the settings through the viewfinder.

Due to its simple elegance, this is not a camera with a lot of modern "features", but its meter is far beyond anything else from the film era that I've used. The meter is center-weighted, as with many manual-focus film cameras. It excels in low light and remains capable through broad daylight and in trickier conditions with mixed or variable lighting.

While the robust meter is billed as centre-weighted, but I find that it is more strongly weighted than similar cameras towards the center of the image.

. The meter is rated to EV 1 through EV 18, with off-the-film metering to precisely measure the amount of light striking the film during exposure. Off-the-film metering was one of the more sophisticated varieties available at the time of the camera's release, and remains extremely precise despite three decades of advances in film.

With the XD I seldom find bracketing to be necessary, as the meter is reliable. I use the center-weighted meter like I would a spot meter—identifying an area that I want to expose for, then adjusting with the manual controls. With the XD these controls amount to an exposure adjustment dial (+2/-2) and of course reverting to manual exposure settings outright. 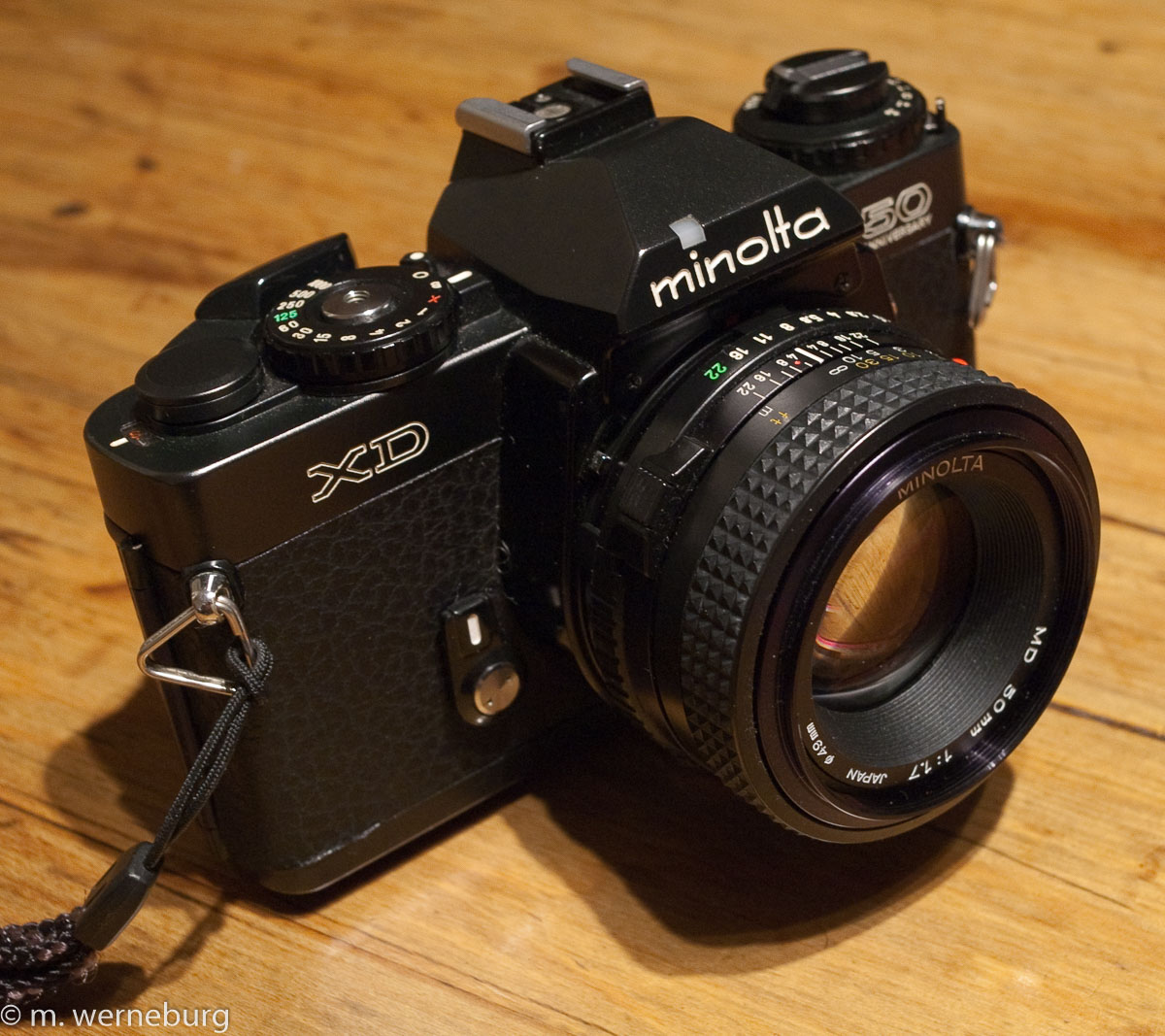 The versatility of having both automatic exposure modes is supported by the viewfinder, in which both shutter and aperture settings are prominently displayed. The presentation of this data depends on the exposure mode: when in aperture-priority, the aperture value appears at the bottom of the viewfinder and the shutter speed appears on the right, where a marker points to the derived value appropriate for correct exposure. When in shutter-priority mode, the shutter speed appears in a box in the lower-right corner of the viewfinder, and the aperture appears on the right—again marked according to the correct exposure. The viewfinder image itself, meanwhile, is a beautifully crisp and large image thanks to the Minolta Acute-Matte focusing screen, the 94% view coverage, and 0.87 magnification.

The shutter is of the vertical-travel variety and is particularly quiet when compared to contemporary Minolta cameras such as the X-700. The meter operates at a flash-sync of 1/100s, and when used with the X or PX series of flashes is very consistent. The shutter also has bulb and 1/100s mechanical modes that allow the camera to be used without a battery.

As I say, this camera is not laden-down with unnecessary controls. The short list of controls is:

All of these controls have an excellent engineered feeling to them. They're made of quality parts, are wonderfully shaped, and have superb action. This is especially true of the manual exposure setting dial and the film advance. Everything on this camera is exactly where it should be, and all of the controls work every time. This is the way a camera should be! 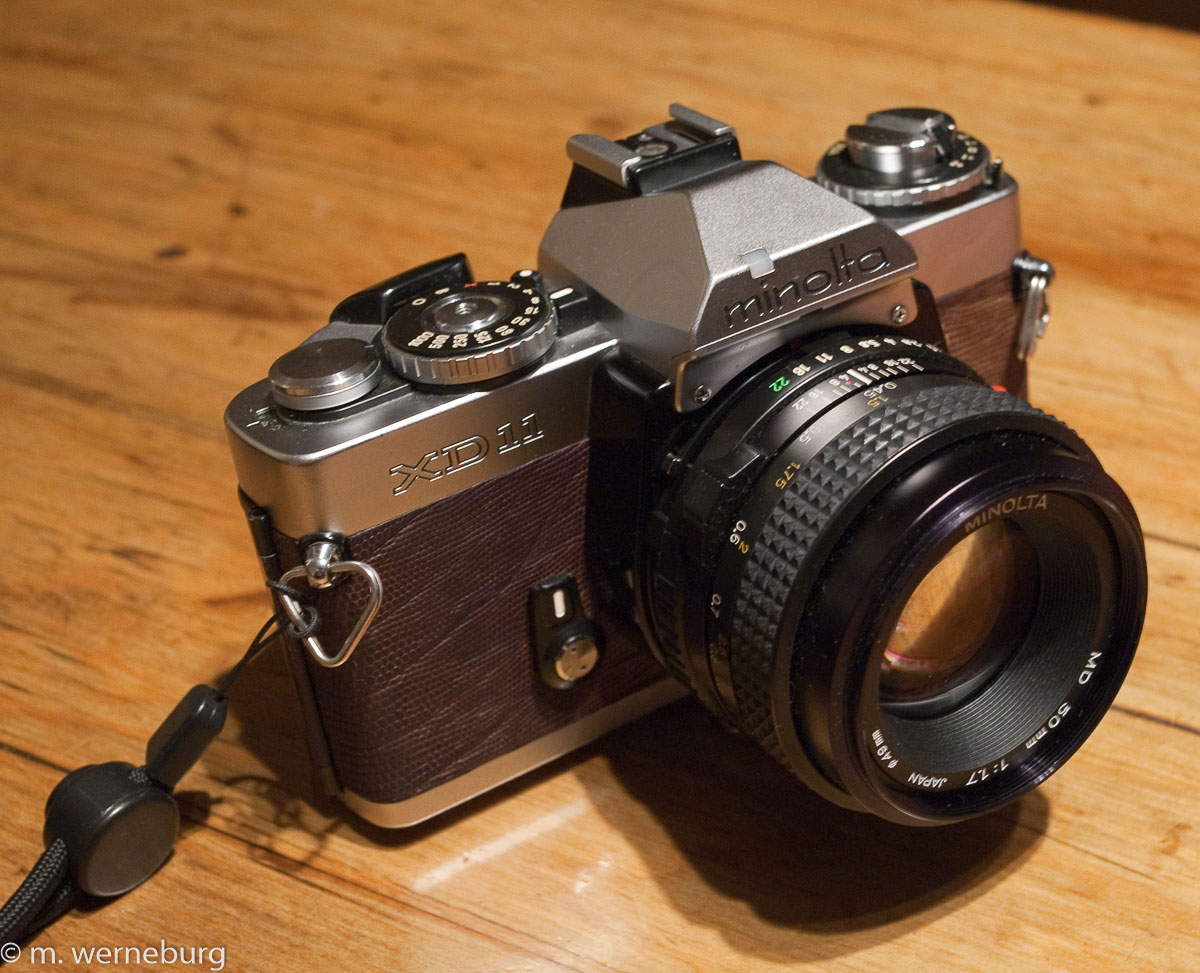 Maybe not something that everyone considers when looking for a camera, but this is a damn fine-looking model. It is downright sexy. Also, it's got a perfect heft, being just the right size and weight to further encourages its use. This is a camera that you want to reach for.

Quite frankly I feel that the lack of this attention to in-hand feeling in modern DSLR's is a non-trivial distraction while using the things. In comparison with my XD body, I find using digital cameras to be half-way to using a photocopier—all buttons and menus.

(a no-frills 280PX) but I am consistently pleased with the results—and sometimes quite amazed. Gone are the blown-away colors, heavy shadows, and glassy eyes on-body DSLR flashes and the hit-and-miss exposure of the third-party flash I used for years with my X-700. This camera knows how to use a flash.

Every camera has a few weak points, and the XD is no exception. Fortunately, these are all relatively minor.

Mine XD bodies are both earlier models that has the hook for the +2/-2 exposure override located out at the edge of the ISO dial. This hook occasionally gets caught on something (camera bag, sleeve, etc) and I don't realize that I'm seriously under- or over-exposing the frames. It's something you have to watch while using this camera. I find that this happens about once a month.

Note that in later models this issue was addressed by moving the hook away from the edge of the camera.

This camera has an overall great built quality. Minolta was foremost a camera engineering company, and this shows in the fine build of this model. That said, this model is not of the same supreme robustness as 'classic' era film SLR's like the SRT101. The lighter weight and smaller size that endear the XD to the user introduce a touch of fragility. The film door on my first XD body, for instance, is slightly warped. The door still prevents light leakage and closes properly, but each and every time I load it with film I wonder if it will fail to close properly.

Also, the screws on the first body's base plate suddenly fell out while I was on my first trip to Asia. Happily I was in the middle of Tokyo and could quickly get it repaired with commonly-available screws. But it's not something I've experienced with my other camera bodies (film or digital).

My first XD is also the first body that I've managed to wear down to the point that the frame advance is starting to grind. Also, the low-light metering is starting to act up. I'm hoping that the latter is due to something relative simple like dust, and not a problem with wiring but again turning to the 1977 review (linked below) I read that Minolta may have cut a corner or two with the wiring. We'll see what happens when I get around to having it cleaned and serviced.

Disclaimer: the problems described above were with a second-hand model (that's Canadian-style second hand, not Japanese-style second hand) and may have been in the hands of a maniac for decades. I typically shoot 2-3 rolls of film a week, on average, which probably lends to its wear and tear.

In the mid-70's when this camera was designed, double exposure was deemed a good idea. The ability was built into this camera's design and unfortunately it has a tendency to infrequently fail to completely advance the film. I've had both overlapping frames and outright double

exposures. This is a small but nagging irritant that turned up in my first XD body about once every 4-6 months.

I don't think this is a weakness of this camera in particular, but I have noticed that results with this camera can vary with the age of the batteries if you are not careful to use good batteries. I now use two 1.5V Silver Oxide SR44 batteries or a single 3V Lithium cell, and not the 1.5V Alkaline LR44 batteries. The latter seem to cause inconsistent results. I've read that it's due to yield uneven current over their lifespan. I don't know the details on how the camera uses its charge, but I've certainly noticed a tendency for the meter to underexpose shots when using LR44's that are only six months old.

This camera became a personal favorite almost immediately. I now own two of them, and the XD is my principle camera even to the exclusion of my digital SLR. Along with the two other Minolta bodies I've used extensively (X-700 and SRT101) I'm convinced that Minolta was a first-tier camera manufacturer, in its day. I would acknowledge that some of the Pentax lenses I've got are better than those from my Minolta stable, but the Minolta bodies are just a pleasure to use.

other sources on the Minolta XD

Character is like a tree and reputation like its shadow. The shadow is what we think of it; the tree is the real thing.