This is my guide to other newcomers to the art of keeping fish. I am not interested in pristine show-piece aquaria, but rather a lively home to healthy fish that's a part of a comfy home. It might look a bit low-rent with dirty sponge filters and noisy bubblers, but the idea is to engage the viewer in the sustained and stable ecosystem that's present, not to provide a bloodless 'centerpiece'. 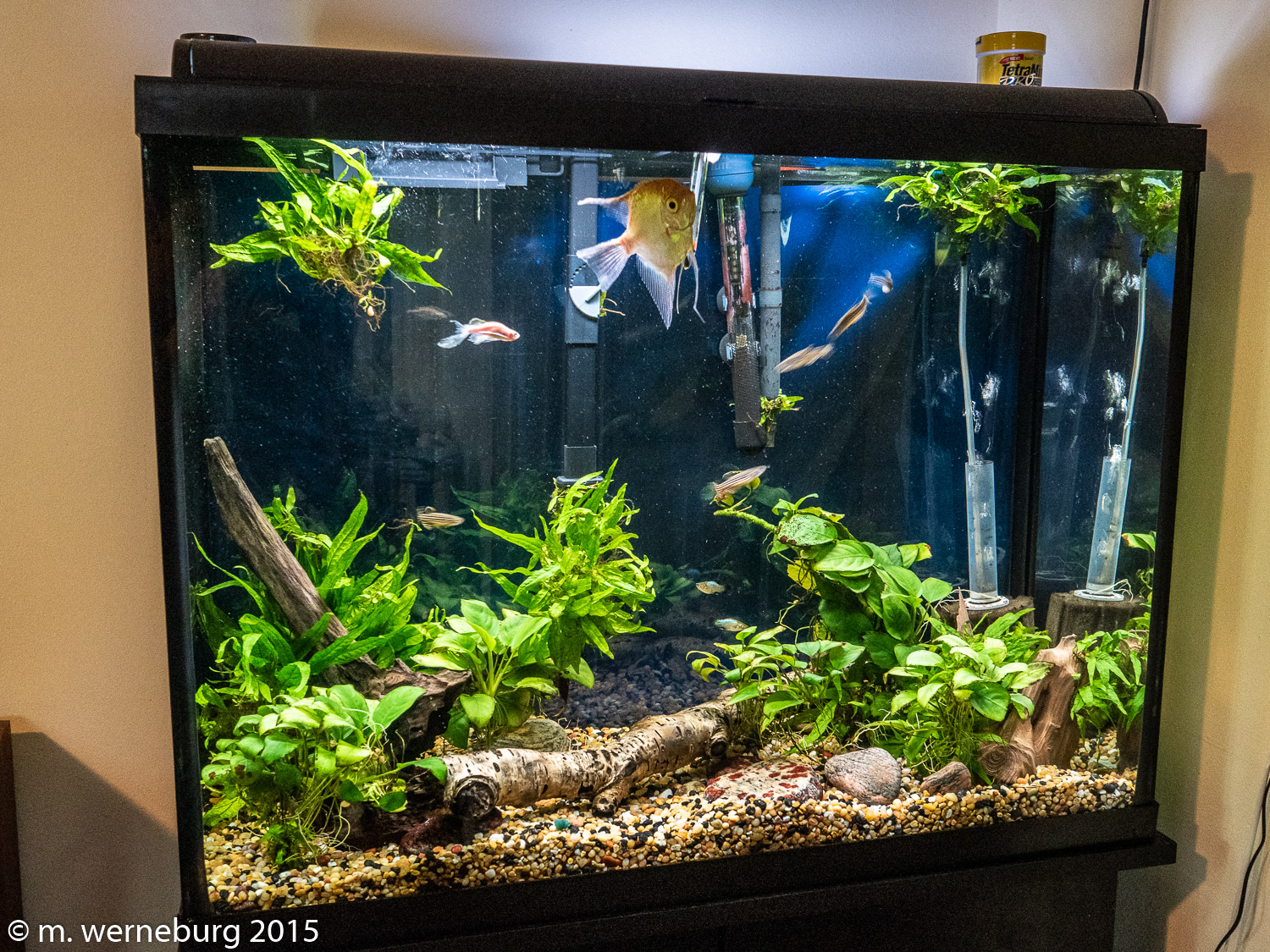 the politics of keeping tiny fish

Keeping an aquarium is an odd hobby, in which you use living things as ornaments. I suppose there are probably people who consider it inhumane for that reason. But the point isn't to parade some beautiful little creatures in a moodily lit display environment. Instead, you're raising those critters in an environment that they, too, find pleasant. We owe it to the fish we keep to do a good job.

The basics often escape us. We don't pay enough attention to water quality, we might not provide an environment where the fish feel physically safe, and we might provide unhealthy food. It's likely that we've created stunted subspecies by providing unnatural surrounds free of terrorizing predators, surging currents, droughts, and starvation. Worse, we breed for uselessly long fins, unnatural color combinations, stunted size, and even shortened spines in the case of fancy goldfish. And by in-breeding our stock with other captives, we weed out the hardiness and even the distinctive behaviors that once defined the species. For instance, the ubiquitous angle fish of our aquariums has forgotten how to raise its young, and no longer bothers.

So I think it's all the more important to do our best to keep chemically stable aquariums in which robust species live in neither torpor not terror, with some stimulus but a great deal of respect for their natural state. 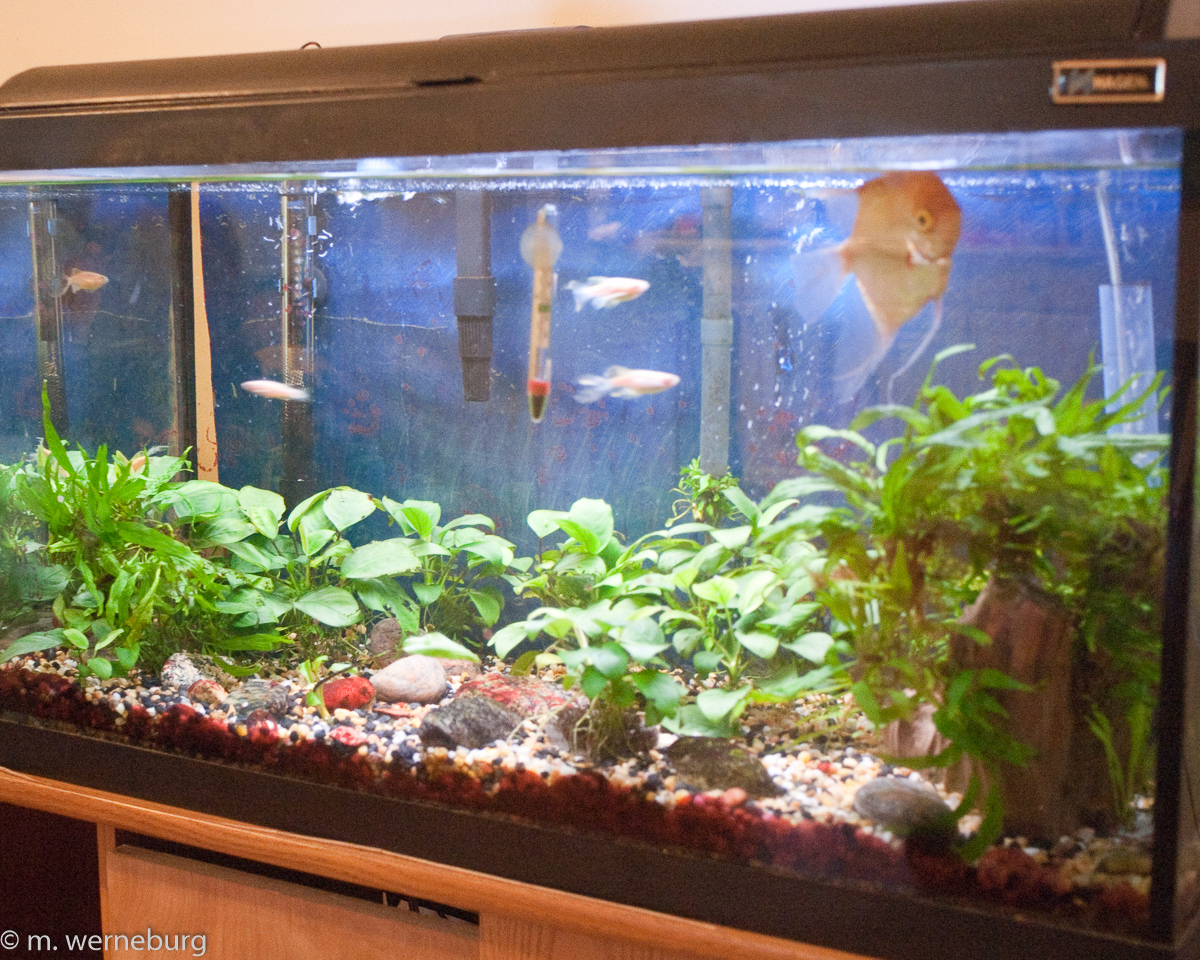 An older version of the aquarium above

run the aquarium with no fish

Starting a new aquarium without killing its inmates requires more patience than you might imagine. To me, the key is this:

If you're setting up a new aquarium, let it run for several weeks without fish in it. Instead of fish, start with a couple of inexpensive aquarium plants, and let algae grow. The idea here is to stabilize the nitrogen cycle. The plants will come with not only algae but also the beneficial bacteria that you want to colonize your filters. If you have a spider plant in the house, you can add a 'baby' from that, wedged in the top of the aquarium so that some of the leaves are above water.

The substrate will become covered in slime, and there may be long strands of algae growing on the plants, the glass, and .. everything. Don't worry about any of this, it means that living things are using the nitrogen in the water.

Monitor the water quality. You might see a spike in nitrite. Do not try to treat this. There are no fish to sicken from this spike, and those bacteria we're trying to establish need that nitrite to feed. If you see nitrate start to slowly climb (I usually don't without adding fish) you need to start doing partial water changes. Once some nitrate is present you have an aquarium that's on the road to stabilizing.

Keep as few fish as possible, in as large an aquarium as you can keep. The aquarium below was a very small one, barely more than a hospital tank for a single recuperating fish. And that's how it started out. But I found myself using it so much that I got some gravel and a stand and a hood, and by that point I decided I'd need an outside filter and some further ornaments and some live plants. 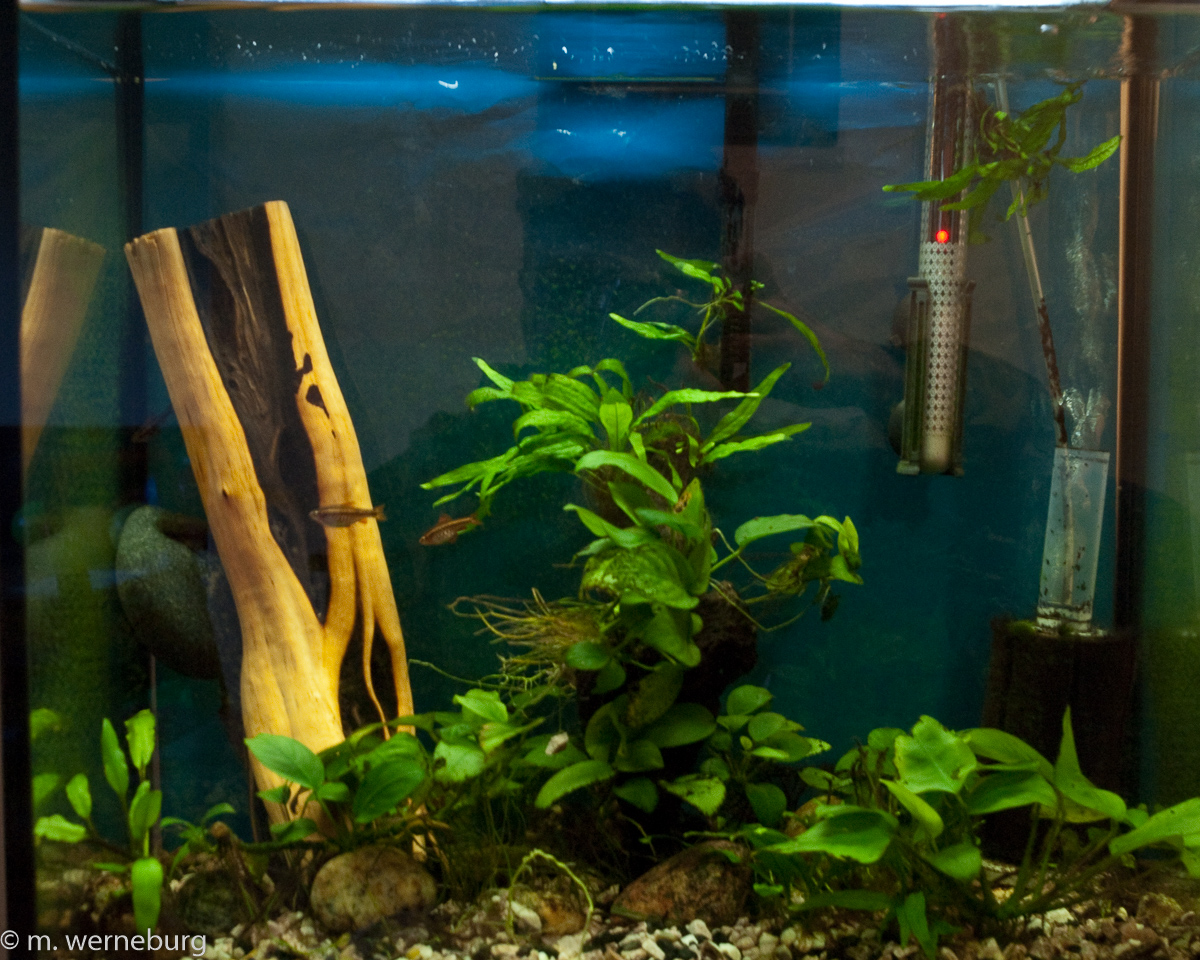 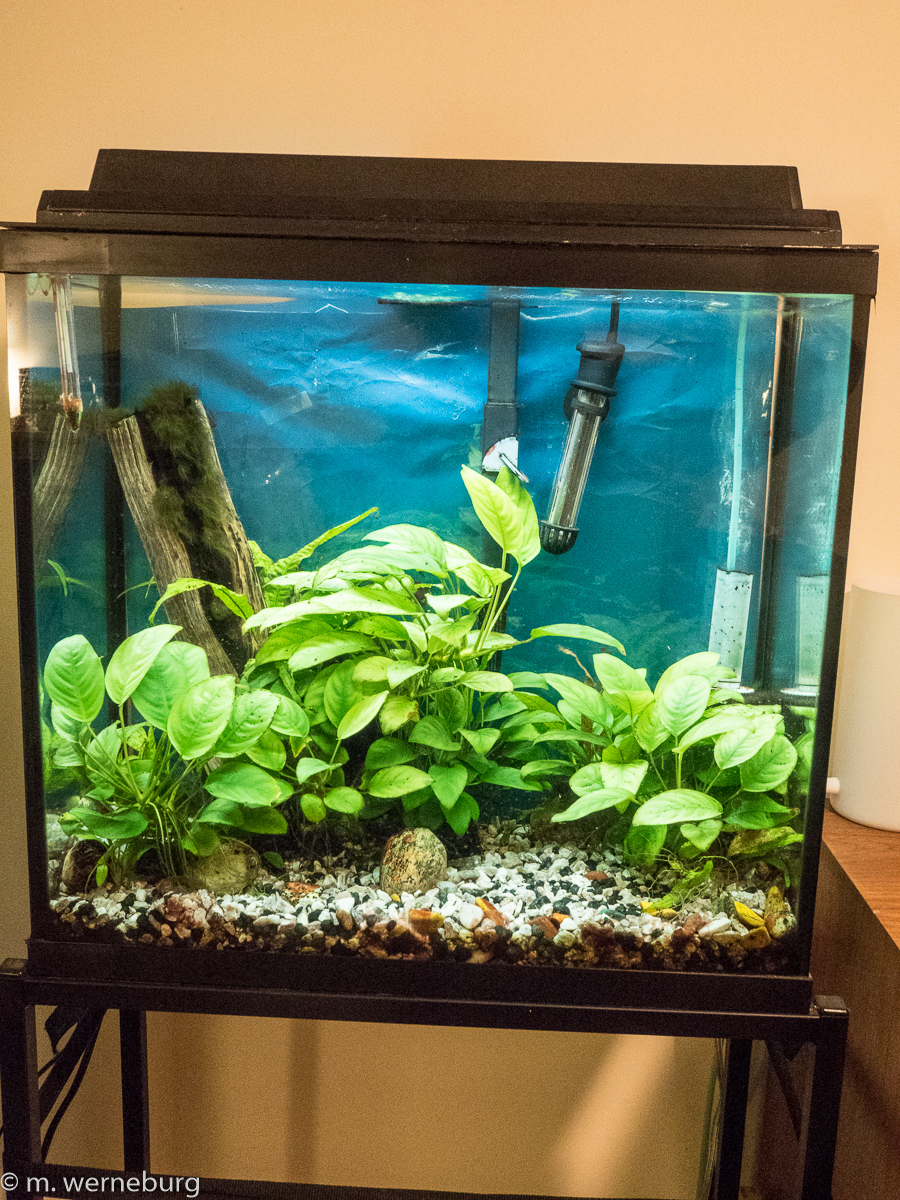 That aquarium had only two tiny fish (both of the aforementioned stunted varieties). One was a dwarf gourami, which lives near the water's surface. The other was a suckermouth catfish, one of the countless plecostomus varieties that gnaw on driftwood and also algae. For several months, there were two gouramis, but one died (from neglect/starvation while we were away for three weeks). But that was it. A total of five or six "fish-inches" in a 15 gallon tank (12 - 15 fish-centimeters, 60L).

There are several reasons for keeping so few fish. First, it keeps the pressure off; nothing likes to be crowded. Yes, many species like to hang around with a minimum number of their kind, but if you only have room for a small aquarium you can't keep those species. Keeping few fish also means limiting potential conflict between incompatible species.

Second, it keeps the water much more stable. There are tools online such as this handy advisor that will tell you when you've overloaded an aquarium, and you should listen to that advice. It is harder to keep a small aquarium stable than it is a large one, because small mistakes have a larger impact on the smaller aquarium (and you will make mistakes). You'll note, for instance that in addition to all the plants, I have both a sponge filter and an outside filter on that aquarium. This is to ensure that the nitrogen cycle is as strong as possible: the wastes produced by the fish and by rotting food and plants can be converted to relatively harmless chemicals, but there have to be populations of two separate thriving bacteria species for that to work, in addition to oxygen supply (bubbles, plants, spilling water) and mechanical filtration (all that sponge and floss media).

In fact, the easiest way to avoid those mistakes is to start with an empty aquarium that you let settle in; then add a small number of fish and let the system re-balance once again. This isn't as much fun as setting up an aquarium from scratch and dumping in some fish, but it's true aquarium-keeping: the fish introduced in a leisurely fashion will survive. The others won't.

Third, it makes life a lot easier when you're not trying to keep water within the 2°C band tolerated by eight species crammed in a community aquarium, or trying to find a pH balance that suits that many species. Use tools like the "advisor" linked above to find a mix of species that naturally tolerates the same range of water conditions, and you're good.

place the aquarium with care

Fish prefer dim lighting, shelter from above, and plenty of hiding spots. The very opposite of the "display" type of aquarium we like to look at. So let's work with the fish by placing the aquarium away from stressors like distractions, light, temperature fluctuations, and so one. Avoid direct sunlight at all costs - the fluctuations in heat or light can be fatal in of themselves, but warm water tends to encourage plant rot, and the light encourages algae. Under these conditions, the nitrogen cycle can become unstable.

Avoid areas where the aquarium will be neglected. I know, I know - just try reconciling this with the previous two dictates. But it's true; a forgotten aquarium will turn into a death pool.

To maintain a stable aquarium, there are a variety of odds and ends you'll need to use:

In the setup above, there's already a good filter, a good heater, and a good air pump. The pump on the aquarium in the photo above is a bio-wheel unit, but I think those are essentially a gimmick and recommend a standard "Aqua Clear" or something similar. Look for a submersible heater with a temperature adjuster, and spend as if you'll be replacing them every two years - they're unstable and nowhere near as durable as the the components with moving parts(!). I tend to leave the air pump sitting on a small towel to absorb vibrations.

Everything I've mentioned above probably sounds like a lot of work but it really isn't.

Ever notice that fifteen minutes into a Jerry Lewis telethon you start rooting for the disease?