The flumph is a rare species found floating deep subterranean places scouring Sppang's caverns and labyrinths for an enemy they simply call Fapergui. Flumph will explain that these enemies are an implacable army of brain-eating slave-driving wizards and psions from the future. The flumph have dedicated themselves to eradicating this threat, and will assist any party perceived in a struggle with one of their enemies - or any party that behaves in a reasonably noble fashion in general. They are a reliable source of lore regarding the local surrounds, including the other denizens, any magic or treasure, exits, hazards, and so on. They do not carry anything of value to an adventuring party, but have considerable innate healing ability. Because they communicate telepathically in complete concepts, flumphs are able to translate between species that cannot otherwise communicate. They do this faithfully. They use their telepathic ability to discern noble vs non-noble creatures, being attracted to the former for collaboration.

Normally the flumph repels an attack with a squirt of foul-smelling liquid; this can strike anyone within a 20m arc up to a range of 6m - any victim who fails his saving through versus poison will flee in disgust. For 1-4 hours afterwards, a victim struck by this liquid will be shunned by his companions who will not be able to tolerate his presence within 30m until the effect wears off. The liquid is squirted through a an aperture on the creature's 'equator'. If this attack fails, the flumph will attack a single antagonist with one of its many appendages, doing 1d8 damage from the hooked tip plus 1d4 in acid damage. This acid damage persist for 2d4 rounds. Alchemists have so far failed to create an effective antidote. 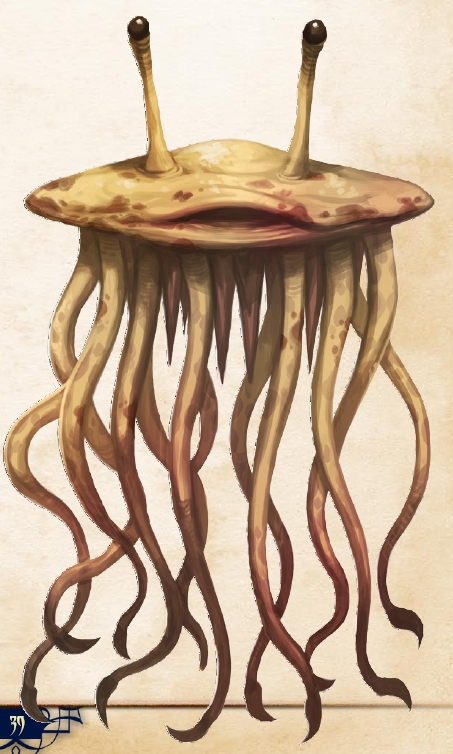 The poison on a flumph's tentacles is artificial, made by the flumphs. It is instantly lethal to illithid. It cannot be shared by the flumph, who have used the venom on their hooked tentacles.

If you want to know what god thinks of money, just look at the people he gave it to.