I'm adopting the Dungeons and Dragons game "Labyrinth Lord" to suit my tastes, and it's been great fun. I'm rewriting it myself to a) clean up the language and a few of the nonsensical rules and b) make a game with a new flavor. While I leave most of the rules alone, I've drastically changed two races, modified a third, and added a fourth. Oh, and over-hauled the system of character attributes. I didn't set out to eliminate Charisma and Wisdom, but that's where it went.

Labyrinth Lord is a reworking of the original basic/expert D&D ruleset, where classes are race (e.g. your character may be an "elf", but not an "elf thief"). I've kept all that in place, but my "halflings" have always irked me in D&D and it was pulling at that loose thread that got this all started.

The Tolkien mythos works well for the major races (humans, dwarves, and elves) but the fourth "race" - the halfling/hobbit - just doesn't add up. We're supposed to accept that aside from just being short humans, they're a nation-race with distinct abilities (which are... what?). That this rigidly, ludicrously traditional and lawful people would spawn a thriving thief class. That they're not just a Mary-Sue apology for a certain nation of shopkeepers that once upon a time found their resolve when tested. Wheee, no shoes!

I wanted interesting halflings. Less "doughty", that's dwarf stuff; what about .. shirking? Less rotund, more lean. Less charismatic, more irritable and toothy. Landless, witty, quick and sticky of fingers - possibly even sometimes nasty. Not a race of thieves, but a tribe of goblins that can certainly produce a thief for an adventuring party. I've given this creation of mine its own page.

And now I'd developed a taste to carry on. A radical change like that not only opened my eyes to what's possible, but alerted me to the possibility of imbalance. Also, I felt a need to understand the roles that the different races play: I wanted guidance on keeping the whole thing "narratively consistent".

My TV Tropes addiction pays off?

Then I read the TV Tropes page on five races that outlined five main racial archetypes in fantasy/sci-fi fiction. I interpreted this for my D&D game by developing five character types that flesh out a universe of plausible races that are complementary to one another and make for good story telling.

The five d&d character types on the TV Tropes page are:

*The "strong man" from TV Tropes's excellent analysis of the five man band. TV Tropes is a terrible, terrible drug.

With my halflings, I'd dealt with the Cute. Humans were Mundane, and dwarves were the Stouts. So, I had to position the elves, would they be High Men or Fairies?

Elven supermen are our superiors

Elves in D&D try to have it both ways. Tolkien's elves are super-human High Men in every way. Even their penalties (e.g. crazily long childhoods) are not really penalties. You could see them slotting in between mortals and gods (as Gandalf in fact does in Tolkein's works), but it's unlikely that elves would ever hang around with their short-lived, dumber neighbors. And why would they ever get involved in adventuring? Why take the risk. When you're that smart and had a four thousand year future to think about, you'd just pay some desperate humans to do the dirty work!

I wanted motivated elves. Elves that weren't necessarily going to live long and prosper. A racial remnant, perhaps. A group that knows why - or part of why - the world is such a retrograde crapsack. They're bent on righting old wrongs, and maybe exonerating themselves. This suggested that elves could be agile and deeply intelligent, but far more in-the-now than Tolkien's elves, and therefor more tolerant of mankind's company. A race of diplomats and administrators, perhaps, and when they're adventurers they're polymaths. With human-like lifespans and some realistic limitations, they're High Men. But not demigods.

That left just the Stouts and the Fairies.

In the standard D&D milieu, dwarves are more of a cliche NPC trope than a playable race. They're the guys you go to when you need to buy something made of metal. They're uniformly irritable, taciturn, and isolationist but inexplicably make and trade top-quality goods of every kind. And as a player class, dwarves are essentially redundant to human fighters: unusually short human warriors who wield hammers (and in later versions ride wild boars).

I wanted dwarves that want something, rather than just do things. In keeping with the archetype of The Stout, I needed a rationale for their legendary strength and endurance. Happily, I had a template in our own human history. My dwarves became Neanderthals, living in cooler climes than humans, be they sub-polar or alpine. With broad features, and bodies that are immensely strong & durable. And incidentally capable of inter-breeding with humans. Because they're so similar to humans, it made sense that they have a greater affinity for magic and agriculture and everything else humans do.

I still hadn't decided on my faeries, but I was already starting to think about a druidic race, tall and fey. I found a long road to my ultimate selection.

A world with five (playable) races

In D&D, once you've selected a player class, you can roll up its attributes (strength, intelligence, dexterity, and three others). The rules have it the other way around, but I never saw anyone roll up a character then choose its class.

And in so doing, I opened a Pandora's box. I wound up revising the player character attributes.

As I worked on the class-racial/attribute balance, I realized that the standard attributes were a bit odd. I started looking around the Internet for solutions, and found some useful ideas. And a lot of insights.

I had noticed in the 80's that Wisdom is effectively unused in the game. It's the player's wisdom that matters: who wants to be the DM who says, "No, silly, your character's a lot less foolish than that!".

Next, Intelligence is a bit of a wide matter. If wit is your insight and intelligence is learning and recall, wouldn't it be more effective to replace Wisdom with Wit, and rename Intelligence to Learning? Then you'd have street smarts and book smarts. These pass a critical test for me: you can roll dice against both in circumstances that are true to the game's rules without irritating the player.

Constitution, meanwhile, is heavily used in the game. But is it independent of Strength? Is there a really heroically durable weakling? Or an immensely strong character with no endurance? Good bye, constitution! Your modifiers are going to Strength itself.

Dexterity, you can stay as you are, but I'm naming you Agility because it encapsulates fleetness of foot as well as skill with a bow and arrow.

But there had always been a gap in the original attributes. How many times had I wanted an attribute I could roll against to determine if the character hangs on to his current course of action? So I added a sixth attribute: Will.

And then, finally, I got rid of Charisma. This was the final realization for me: the famous dump-stat really has little bearing on Basic/Expert D&D. Look at the modifiers: they both pertain to how many retainers you can have. I've removed those from my game as unnecessary clutter (like familiars). So that just leaves the reaction adjustment, but does that single modifier really add up to an entire attribute that we need to track? Have you ever rolled a Charisma check? I haven't. I'll leave this to the role-playing.

With my revised set of (five) character attributes, I was able to map the species and human classes against the attributes. The map I made looks like this: 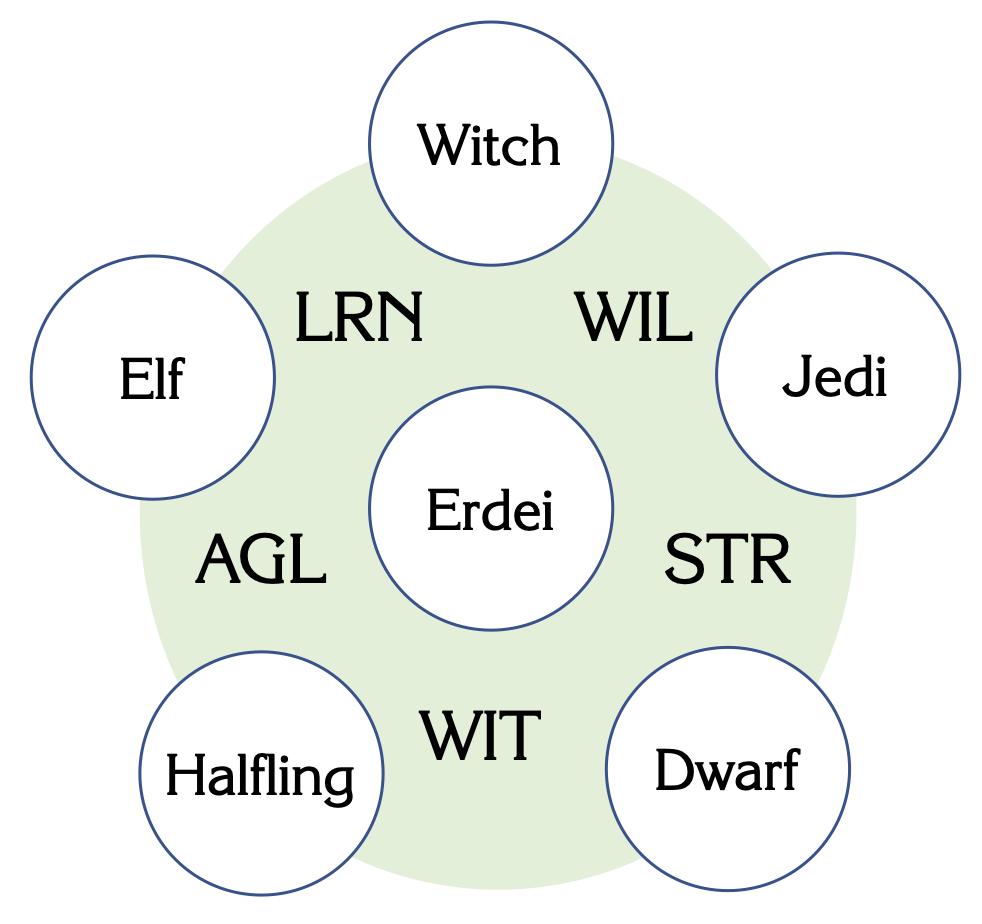 Witches and Jedi were easy to place immediately. Jedi require Will to stay one with the force but also Strength for their many trials. Witches similarly need Learning to understand their craft. But here again I wanted to break with D&D tradition. I wanted my spell-casters to be less the famous "squishy wizards" and more in-the-moment and in-the-know. I realized that by making Wil one of their prime attributes I could have Nanny Ogg and Granny Weatherwax: my spell-casters wouldn't be bookish wizards, but rather determined and shrewd.

The Stout dwarves required strength, obviously. But it occurred to me that if their other attribute was Wit, I could have street-smart, canny dwarves. How else could they be the world's artificers?

With dwarves placed, I decided to dispense with human warriors. To me it made little sense to have two warrior classes, and with (some) magic use and other skills, dwarves run rings around warriors. So do elves for that matter. Buh-bye.

My elves are effectively Grey aliens; lithe and quick but also knowing a lot of lore. So, they fit between Agility and Learning.

My halflings would fit nicely between Wit and Agility. At this point, my ring of attributes was complete.

But where was my Fairy race? I still had one type of magic to get into the game: druidic magic. That worked perfectly with a Fairy race. But where could they fit? With the Mystics? Druids never struck me as Charismatic. With the Wizards? How could I fit witch magic with earth magic without it feeling shoe-horned in. Also, would druids really be "squishy wizards", with penalties to strength and agility? That doesn't sound very fey.

Then I noticed the hollow space in the middle of my diagram. Could I cheat, and put my Fairies there? Druids are about balance, so it made sense to not associate druids with any particular attribute.

And so was born a race of gravely serious druid-warriors, aghast at the wreckage wrought by man and dwarf. If my dwarves were no longer silent and withdrawn, my otherworldly druid Fairies could be. Strong and silent woodland Fairies, very different from elves and men and dwarves and my little halflings.

Now I just needed a name. It had to evoke the wilds. But it couldn't be something already taken - that would cause all kinds of problems down the road. All kinds of elven and sylvan races had been named over the past 25 years. In the end, I settled on "erdei", which is Hungarian for "sylvan" - a word I found on google translate. Like my halflings, these erdei have a write-up of their own.

a fey druid species for dungeons and dragons

2012.12.12
I'm adopting the Dungeons and Dragons game "Labyrinth Lord" to suit my tastes - the changes have required a fey druid race of tall thin giants

a new take on the halfling

2014-12-12
I'm adapting the Dungeons and Dragons game "Labyrinth Lord" to my own tastes. This has involved a complete reboot of the Halfling.

Ambition is the enemy of man. It stunts his ability to simplify the day. It is in simplicity we find peace.